We all know that Mummy would have liked a nice photograph of us both, all in uniform, against a bright white wall, both smiling at the camera like the standard ‘first day at pre-school’ photograph to get out of the loft on our 18th!

Yeah, we laugh at the thought of it too!

Everyone who knows us will know that trying to get us to stand still on the spot, at the same time, looking the right way, at the right time and smiling on cue, is not actually possible. It has NEVER been done!

Also, it was too warm today to wear a jumper and so we didn’t have full ‘cute factor’ uniform on!!

We do however have lots and lots of shots of us on the move, waiting by the front door, walking up the drive to the car for nap time, which was kind of a practice for the real thing. After nap time, we had a quick nappy change and a little play at home before doing it all over again. 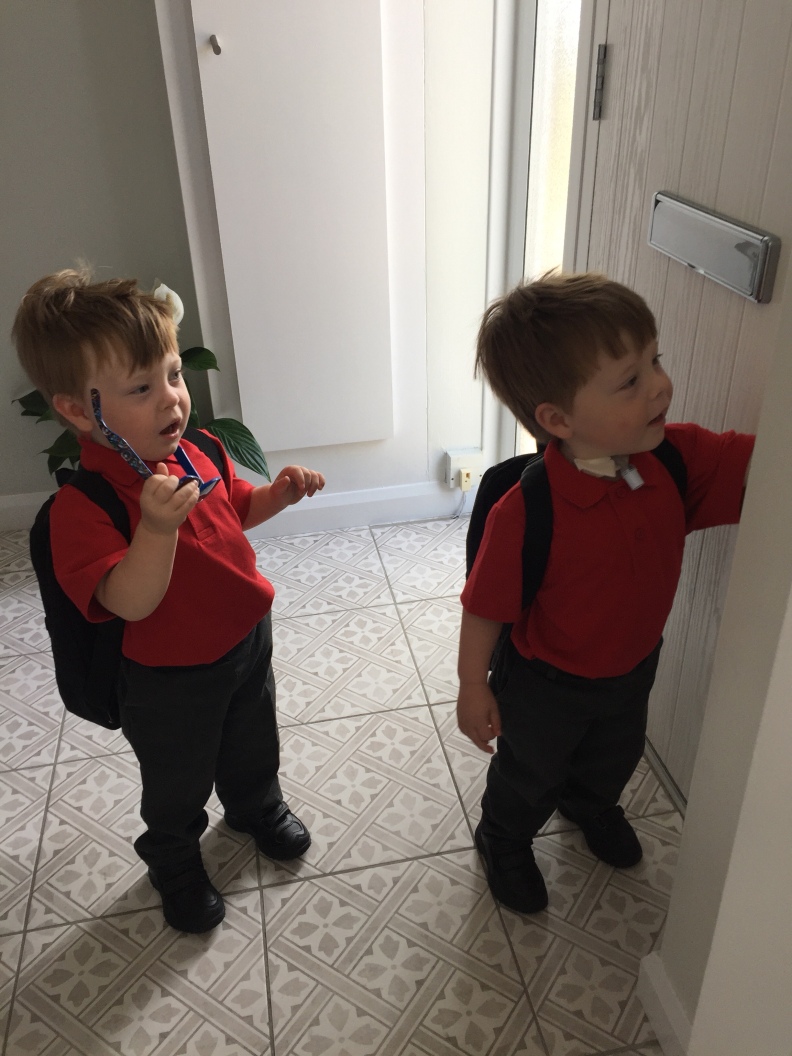 Mummy was really anxious about today, not for all of the normal mummy reasons like leaving us, because really that is something she had to do for the first 99 days of our life, but she was anxious because our last day of pre-school holiday club had a rubbish ending with a really sad Austin, and Mummy was scared that he would remember and be sad and not want to go. Mummy was also anxious about getting us both there on her own. She’d had help from Claire the past few weeks and Nannie used to come before that. There were only a few sessions inbetween that Mummy managed it on her own. Mummy was worried that Austin would be sad and that she wouldn’t be able to comfort him because she would need to stick with Rory to keep him safe from the water and sand. Mummy was anxious about getting us in uniform or our new shoes because we can be really difficult and sensitive to new routine and changes.

She had insisted on practice dress rehearsals and had even driven us to nursery on Sunday to see if Austin got sad about going to nursery, as a bit of a tester for what was to come Monday morning. He was fine!

Daddy sensed Mum was anxious and so decided to drop whatever he was doing at 11:30, help us into the car and follow us in his van to nursery, walking in with us all and helping if needed before sneaking off and leaving us and returning to work. We also think he was emotional and wanted to be there on our first official pre-school drop off, because he had shiny eyes this morning when he left for work and we were stood at the door in our uniform!

So, we got to nursery and wandered in, Austin carrying the plastic box that mummy bought with all of the little adaptations for Rory to manage the risks. Mummy called is the magic box to make it special and gave Austin the special job of carrying it and taking it to the nursery lady, it took his mind off other things and made him focus on carrying the box and taking it into nursery. We both walked in, no drama, and Daddy snook off.

Mummy stayed of course, as Rory’s trained 1:1. She reflected on this point earlier, and whilst early years is definitely not a place for her, and she doesn’t particularly look forward to her shifts at nursery, she actually felt really really blessed to be able to see what the other mummys and daddys miss out on – the magic that happens between drop off and pick up!

Highlight: watching us both in wellybobs, jumping around in the water tray, splashing, with the biggest smiles on our faces.

There were many many others!

Lowlight: Mummy struggles to support Austin with his learning and new routines whilst keeping Rory safe too and has to remind herself that she isn’t at nursery for Austin, she is there for Rory’s medical needs, but finds herself being really hands on.

Target point: We were the only two children who wouldn’t sit down on the floor for story and singing. Despite having a carpet spot, an adult to help and lots of instruction. We will work on this at home for sure!

Mummy says that the nursery staff are really special people. She is really happy with everything so far and she is really looking forward to this next chapter.

When we got back into the car on the way home, she said ‘have you had fun at nursery?’ and we had a HUGE smile! Mummy managed to get this shot, can’t see Austin, but look at the face on Rory. Worth the world over! 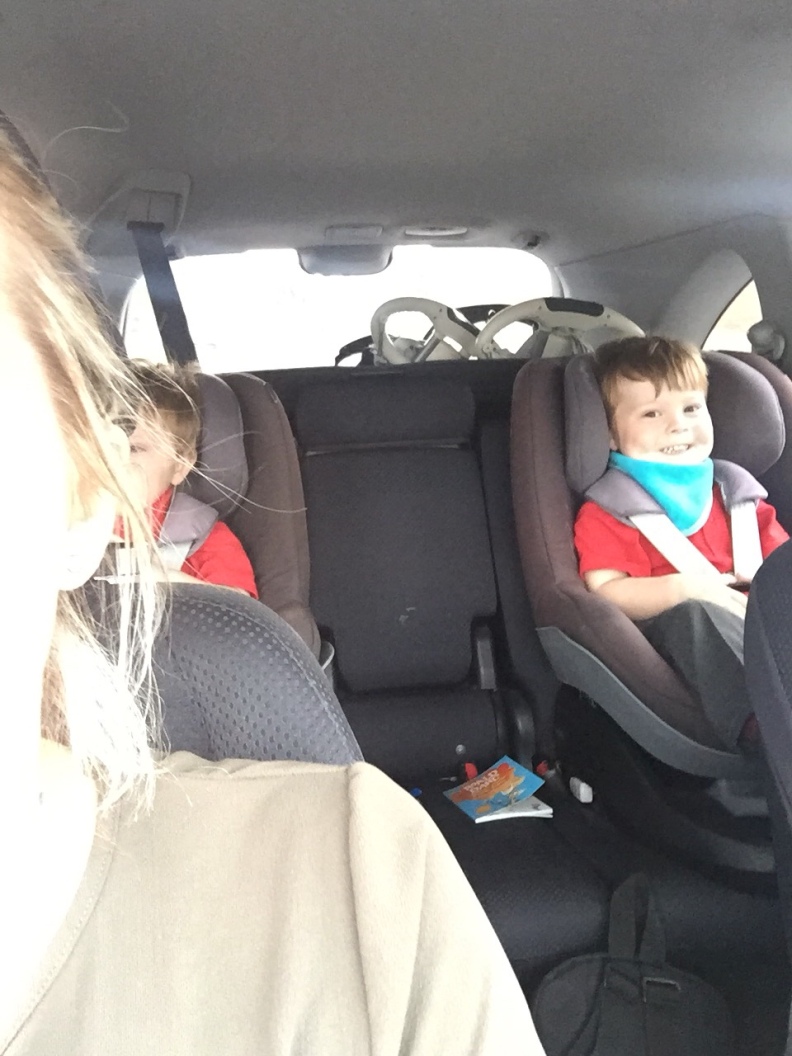 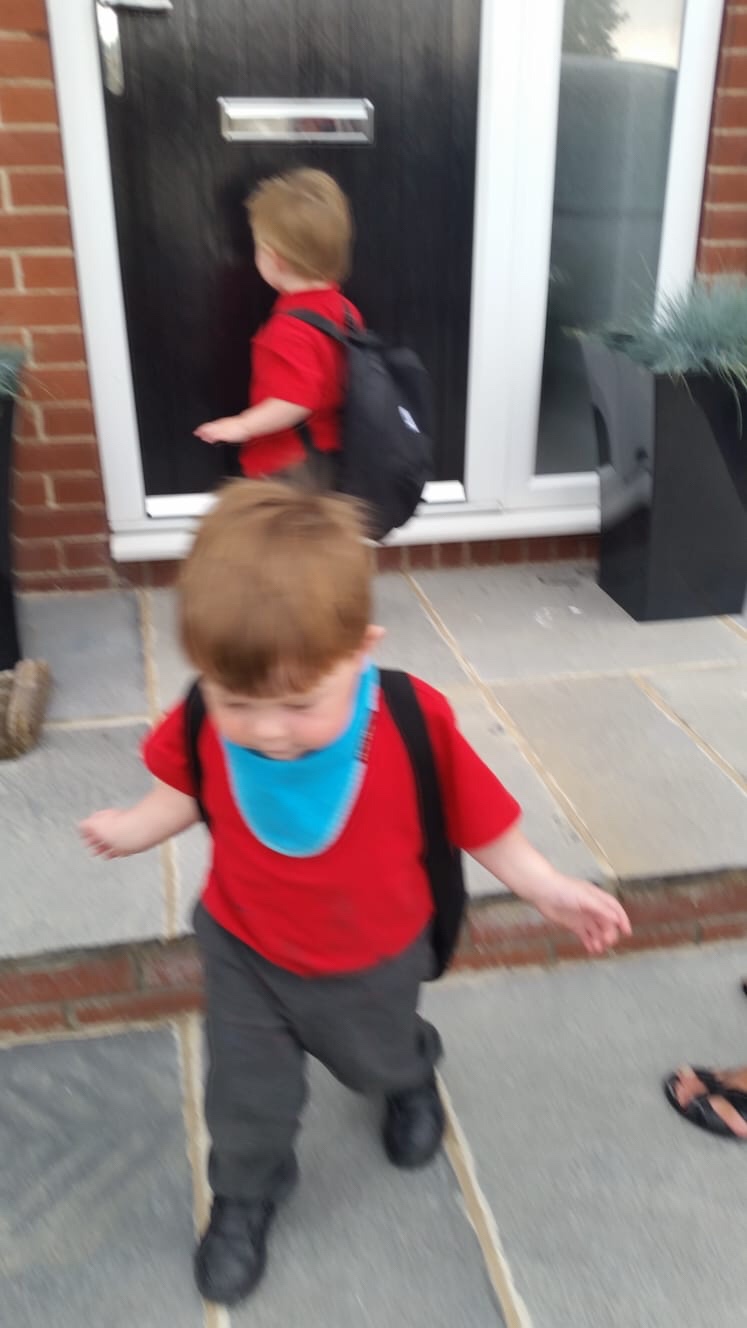 Bring on tomorrow when Mummy does the last training session with nursery staff and hopefully everything is in place and ready for her to leave us with nurse Claire! To be continued….

One Reply to “Pre-School Officials!”