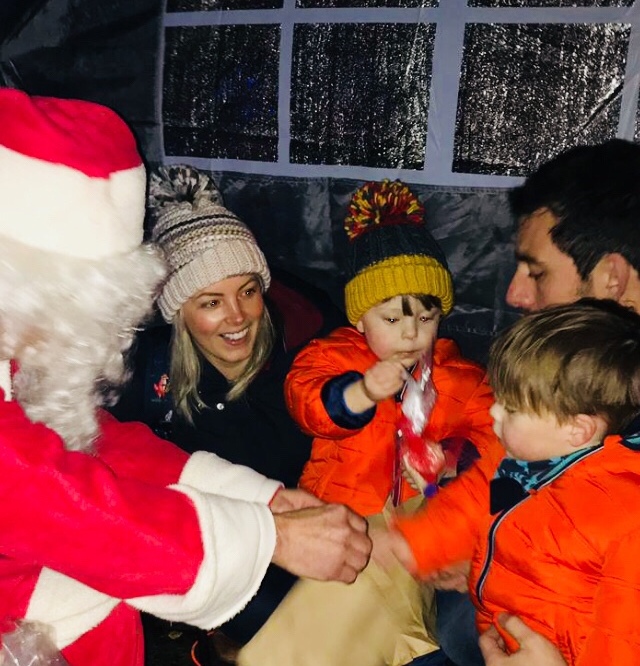 As we all held hands and walked home in the dark, the Mates of Milton Christmas fireworks finishing off in the background, Mummy and Daddy couldn’t help but get all shiny eyed.

Mummy & Auntie Lucy for the past two Christmas’ have had a tagline ‘hashtag perfect christmas’ as a kind of tongue in cheek phrase when our lives are so full of lemons and we are sick of making lemonade with them, whilst the rest of the world posts their ‘hashtag perfect christmas’ all over social media. In fact last Christmas, when Auntie Vicky and Auntie Lucy were visiting, Mummy had a meltdown in the playroom about everybody having their christmas nails when mummy didn’t even get chance for a shower, because she literally has given all of her to us – and hopefully one day when we are older we will tell her how grateful we are. 🙂

Mummy made no secret about not feeling Christmassy because of the previous Christmas’ coming right in the middle of our hibernation and Mummy just being pee’d off with being stuck inside 3 months with at least another 3 months ahead, and it all just feeling forced. Day to day life being so uncertain and so challenging and exhausting that planning activities for a stuffed elf, just because it is the ‘in’ thing to do, is well, the lowest of priorities in our house! Especially when we just wouldn’t quite get it or appreciate it yet! Well….we were kind of expecting all of that this Christmas too, Mummy went to bed on the 31st November feeling like a really bad parent because she hadn’t trimmed up, organised the advent calendars, book advents and all the other Christmassy things ready for the 1st December – all of which family and friends have organised or gifted to us. But blogging for November and getting a good nights sleep were the therapy that Mummy needed to start a fresh December and she would just sort it all out in the morning or something – and would we even know or care anyway? Most likely we would just be creating a daily struggle trying to give 1 book / train / gift per day to two children? Or trying to tell two small children that they can have 1 chocolate and they have to save the others for another day – or just Mum trying not to stress about the clutter of all said advent calendars and where they were going to live for the next month! Mummy can’t just be the only one who things this way can she?

1st December came and actually, it was really lovely when Mummy came downstairs with lots of exciting advent gifts and our felt Christmas Tree. We loved having chocolate, in Daddys words ‘they really appreciate it when they have it don’t they’ because we don’t get chocolate very often, we really do enjoy it. We have 2 chocolate advent calendars each so we are going to get used to this life pretty quickly! Austin thought he had the world with the mini trains that Nannie Di bought us. He has played with them all weekend, taking them to nap time with him, playing with them at the table in Frankie & Bennys and in his pocket for the light switch on. Cute!! 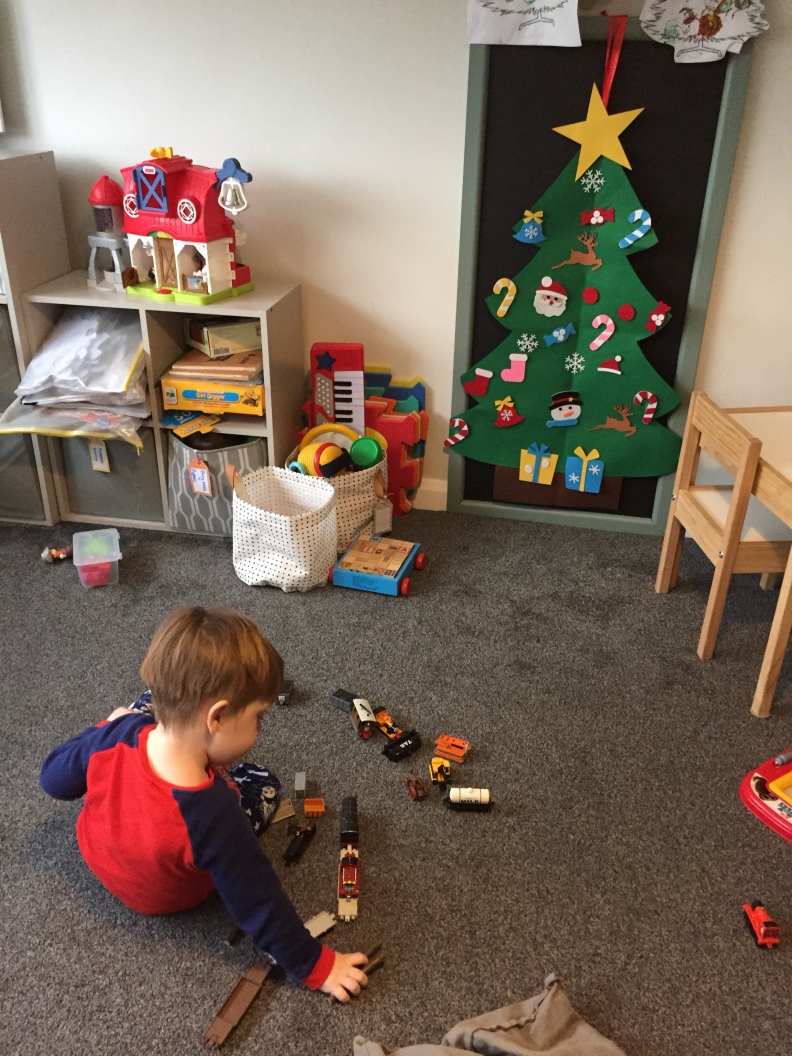 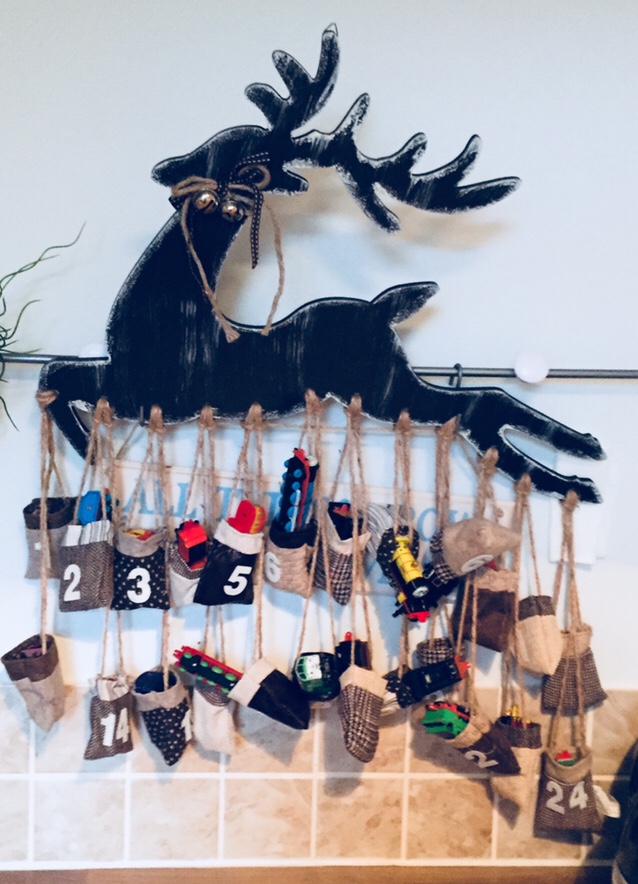 We had a little adventure on nap time, although we didn’t realise as we were asleep. Mummy drove all the way to see Auntie Lucy and Frankie to give her the little felt Christmas tree that Mummy bought for her. She surprised her, dressed the tree, had lots of cuddles and Frankie even treat Mummy to a sing song. After about 15 minutes Austin woke up (we were fast asleep in the car on Auntie Lucy’s drive with Daddy in the car) and so Mummy got back in the car and we hit the road again. 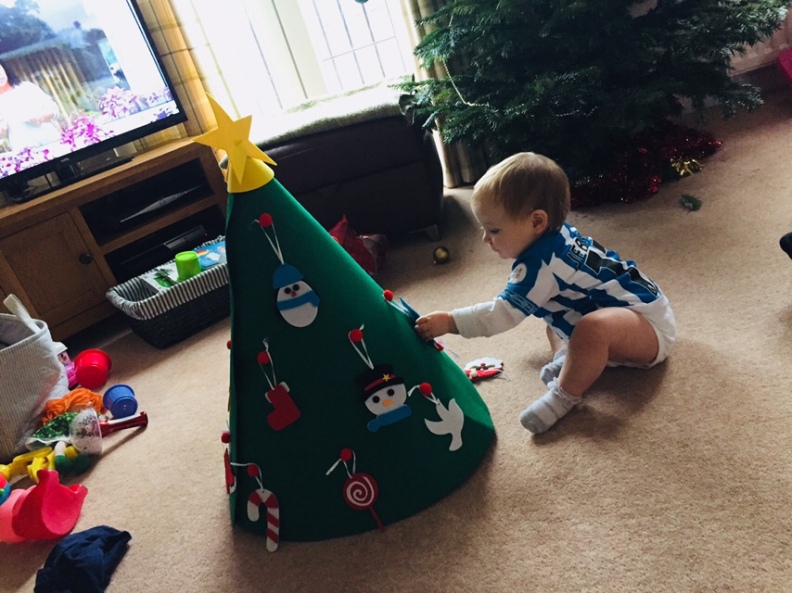 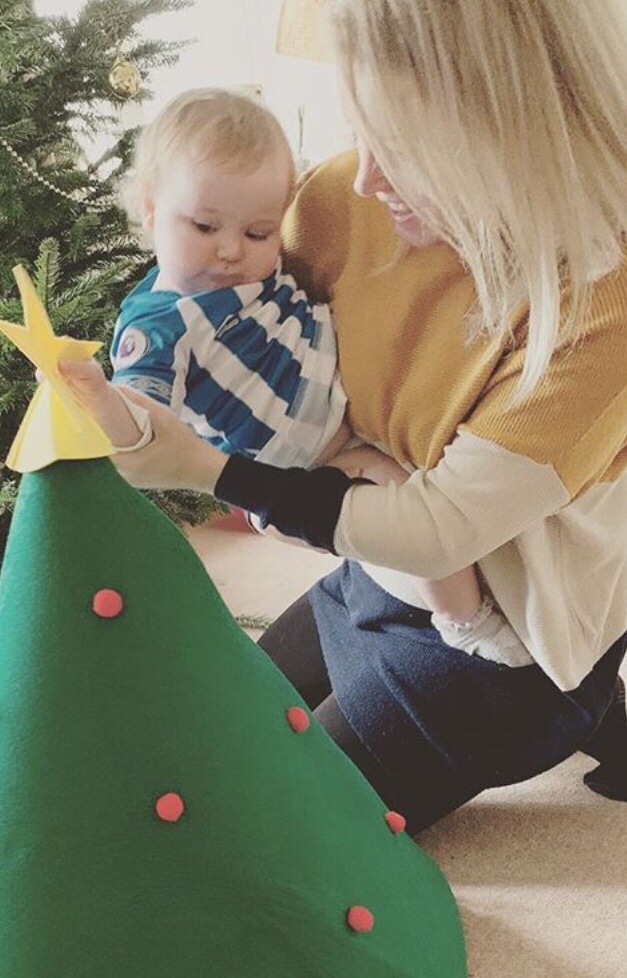 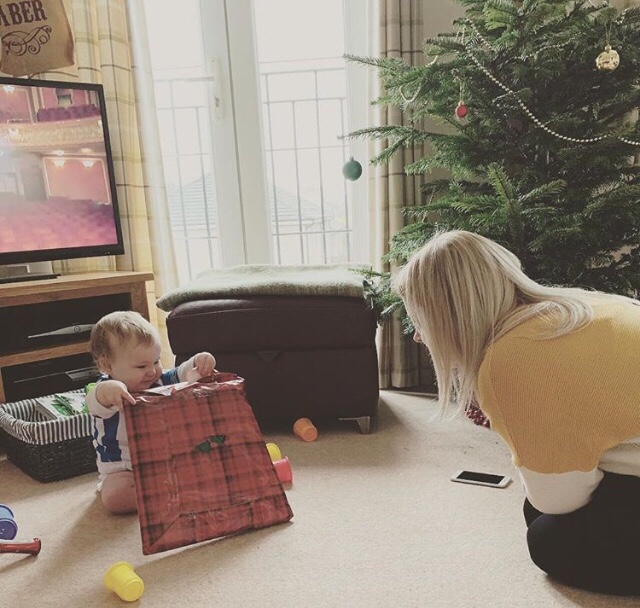 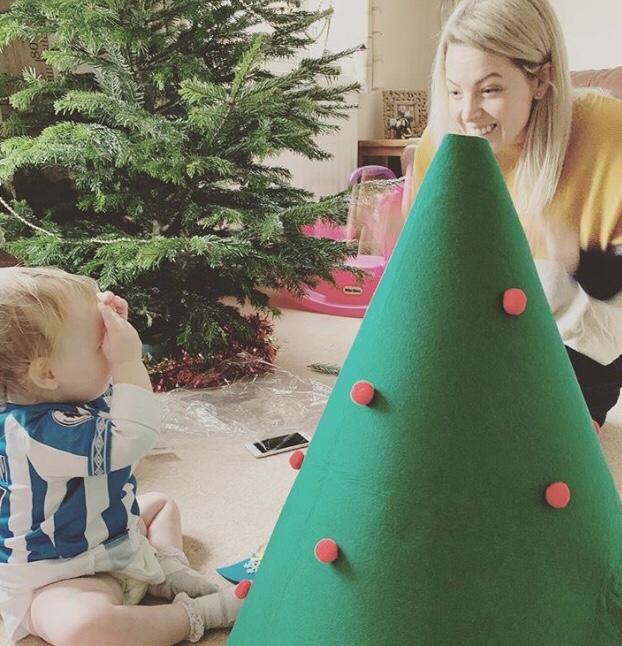 We went to Frankie & Bennys for dinner. We had so much fun using the menus as tunnels for our trains. We were perfectly behaved and the lady at F&B’s even asked how old we were and commented on how well behaved we were for 2 x two year olds. Mummy and Daddy felt very proud even if they did think it themselves – we had been superstars! 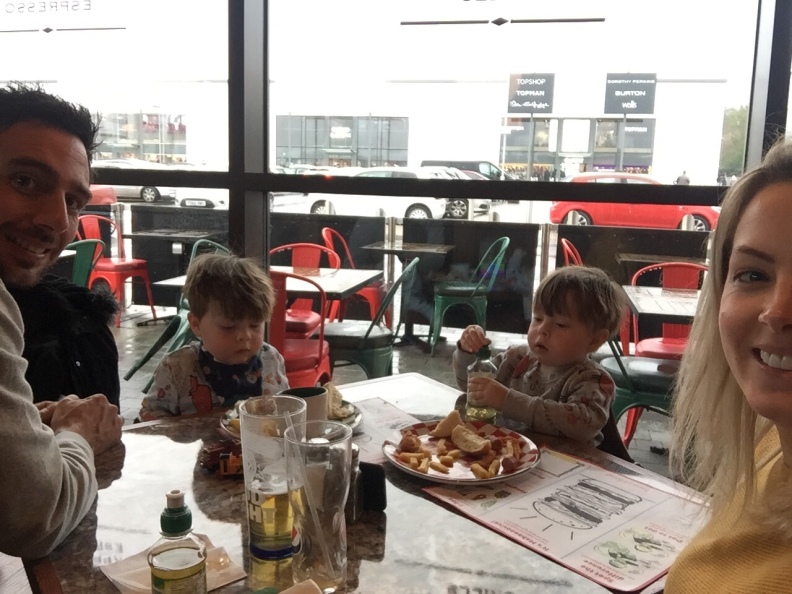 We went home, Nannie Di visited and Mummy tried to make us be Sheep in the nativity. As you can see, Rory wasn’t best impressed! 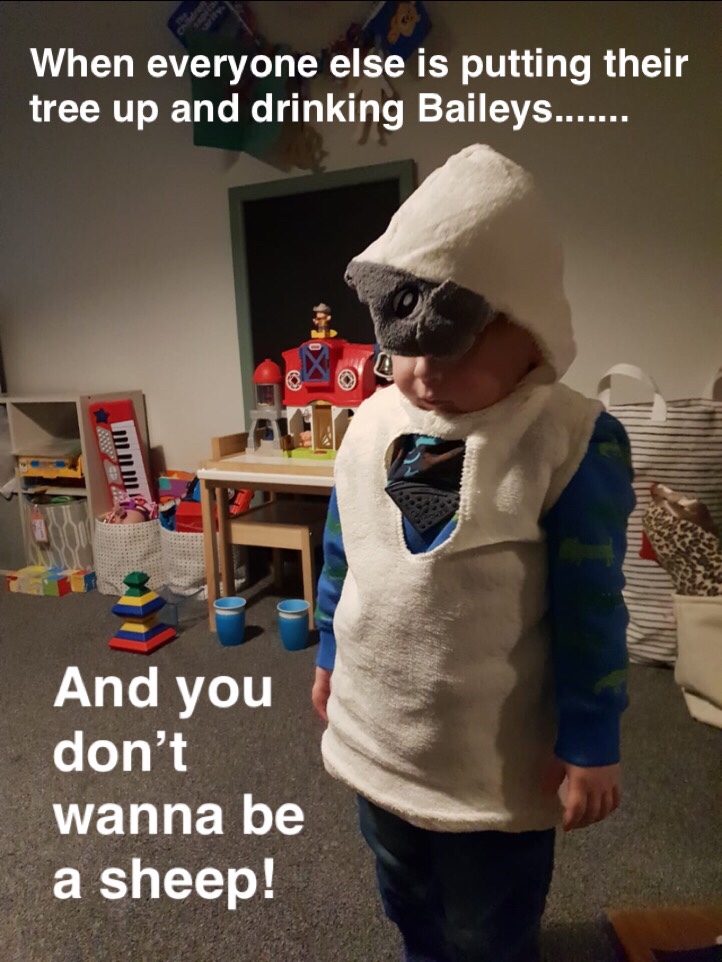 We all went to bed feeling positive after a really lovely day together, discussing a plan for the coming Christmas Light Event in the morning.

Last year, we went to the Christmas Light Switch on but we were really overwhelmed. We shouldn’t have been out and about in crowds so just made a quick visit but it was just too much to handle and we haven’t really done fireworks, santa, big crowds, outside in the dark etc before, so it was kind of a big risk taking us along. So the plan was that Mummy would go and help the Mates of Milton set up for the event, and then come home to collect us and we would all go on for the half an hour where the lights are switched on and then it wouldn’t be too much. That was the plan anyway!

During nap time, Mummy left us snoozing with Daddy and snook in and out of the car with a list to purchase all of the last minute christmas gifts, and so now the christmas shopping is pretty much done. She just needs to organise it all and start wrapping. 🙂 We went for a cheeky Mcd’s and then we went to help Nannie and the Mates of Milton set up for the event. (Off Plan already). We sat in the car for a while watching through the window and then got out for a wander round. We really enjoyed ourselves… 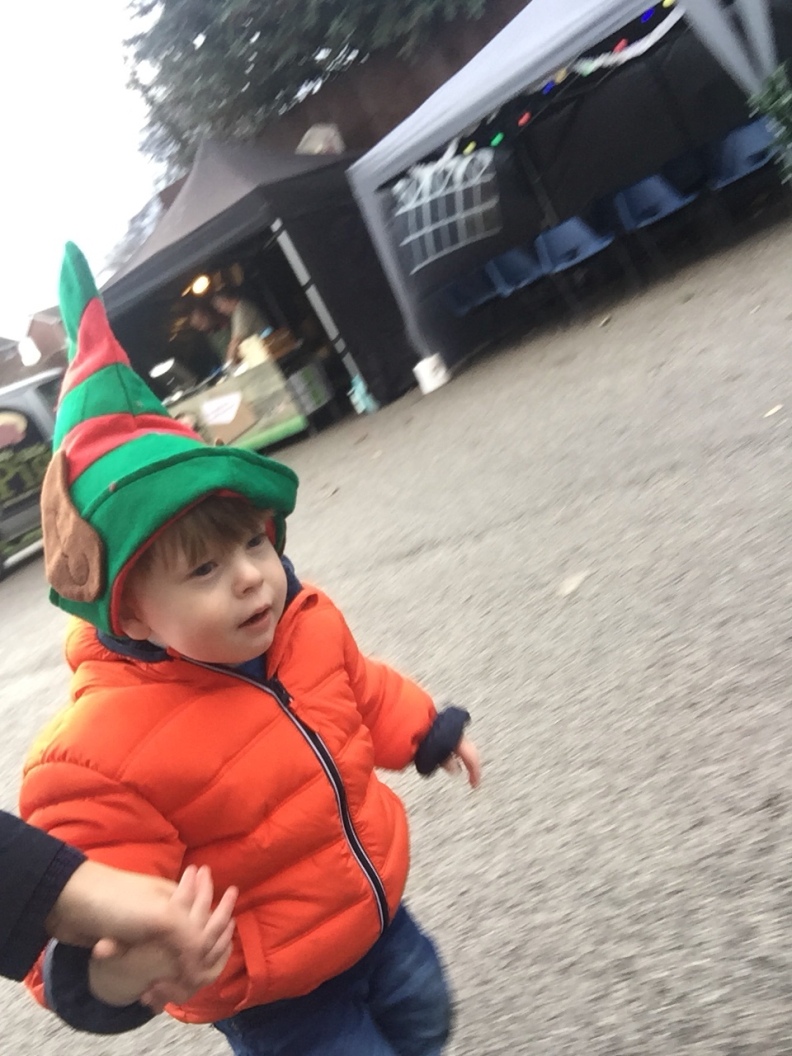 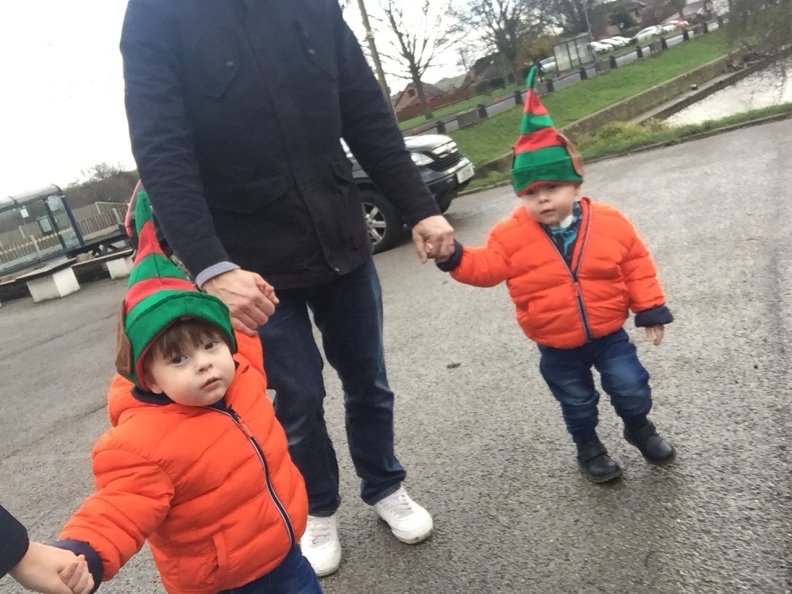 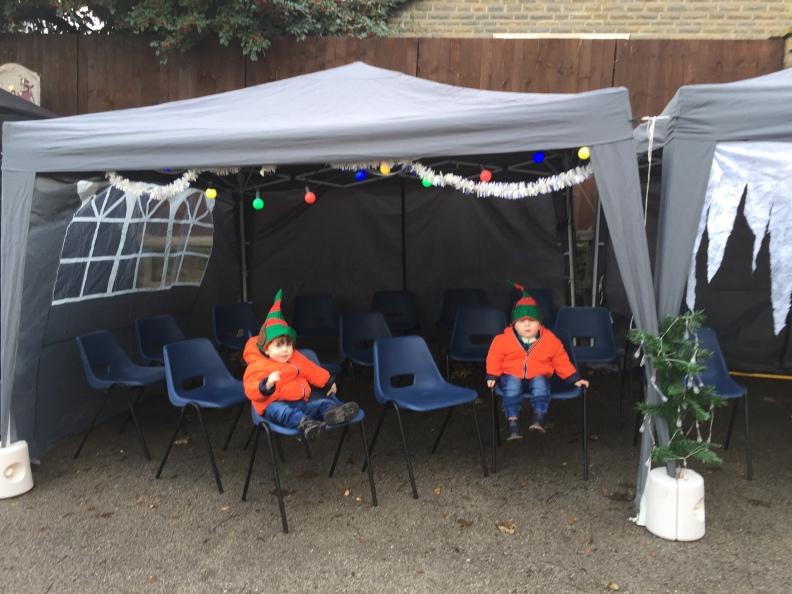 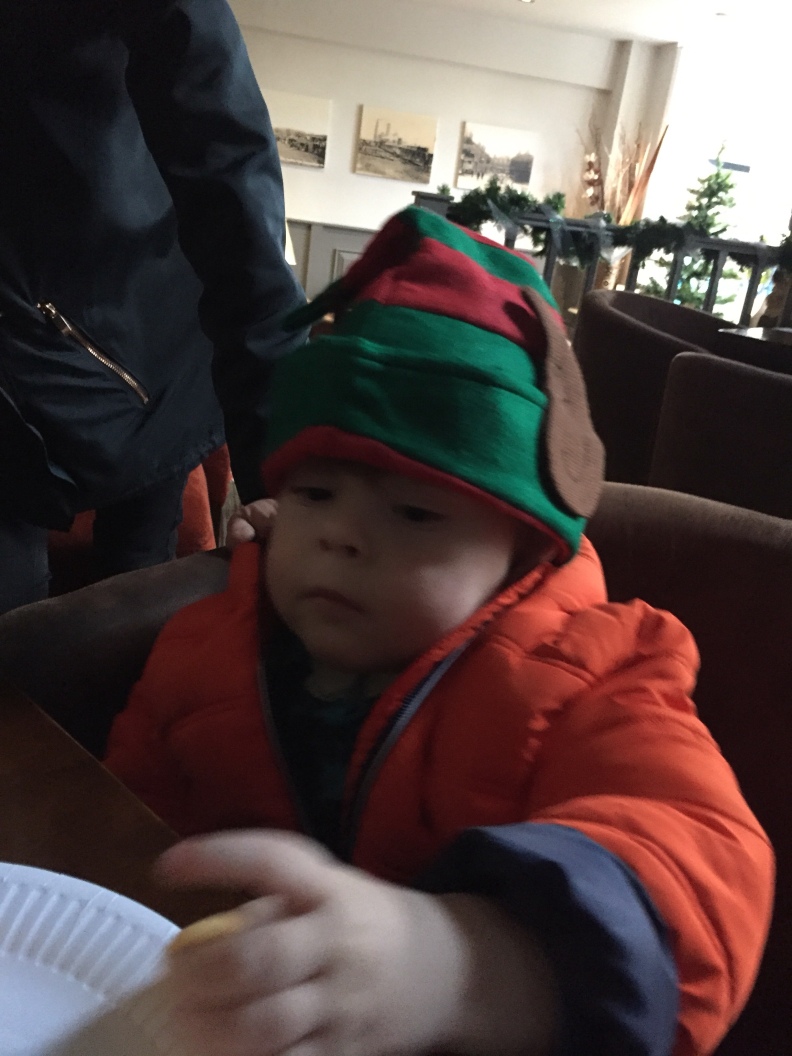 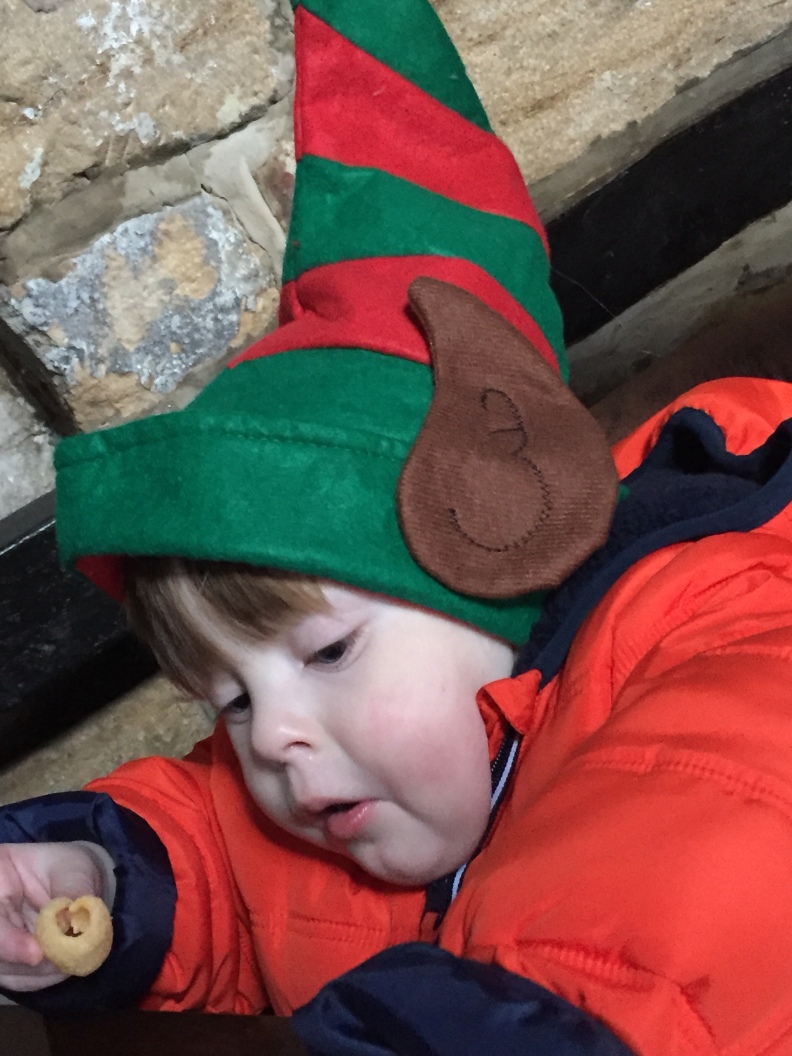 Once they were set up, we went home and had an afternoon with Daddy whilst Mummy went back to help. She came back with some hog roast sandwiches for tea from The Greedy Little Pig and then we all got ready for an adventure.

Nervously, Mummy and Daddy stepped out of the front door with us in hand. Rory was a little unsure about the dark, it was unfamilar being outside in the dark, he turned and tried to go back in the door but with a little encouragement he put one foot in front of the other and before we knew it we were half way down the road and almost at the pub for the event. As we turned the corner, Austin was a little overwhelmed with the crowd and the noise, but he had his little flashy santa badge in his hand which had lit the way for him all the way from home, and that kept him distracted.

Tonight we crossed off so many firsts.

FIRST time out in the dark on foot.

FIRST time at a public event without a pram or trike.

FIRST time in a big crowd on foot.

FIRST time at a firework display

FIRST time up close with a character mascot elf.

FIRST time up close with a brass band.

FIRST time under the snow machine 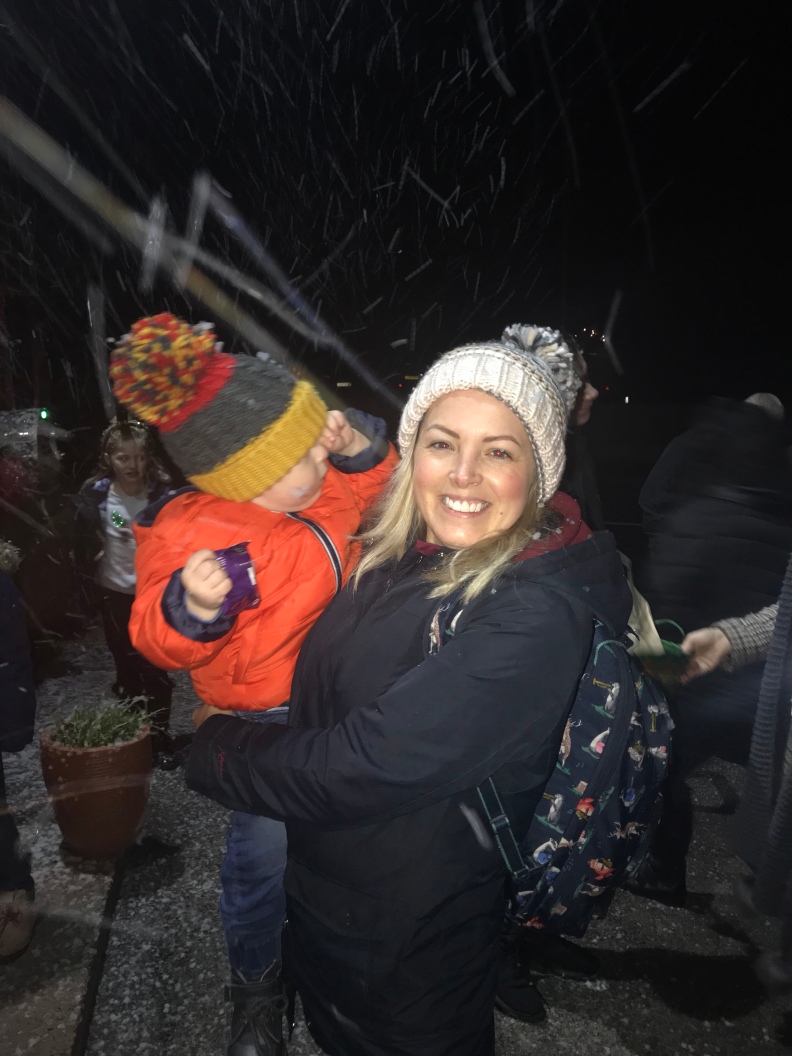 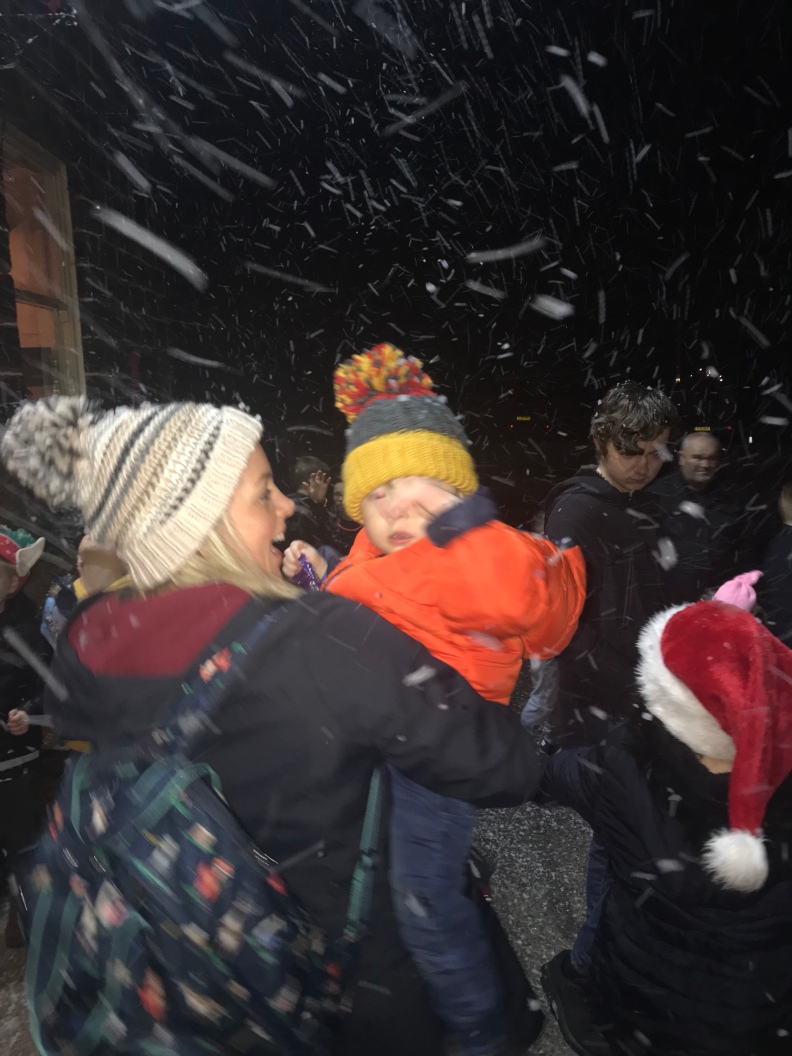 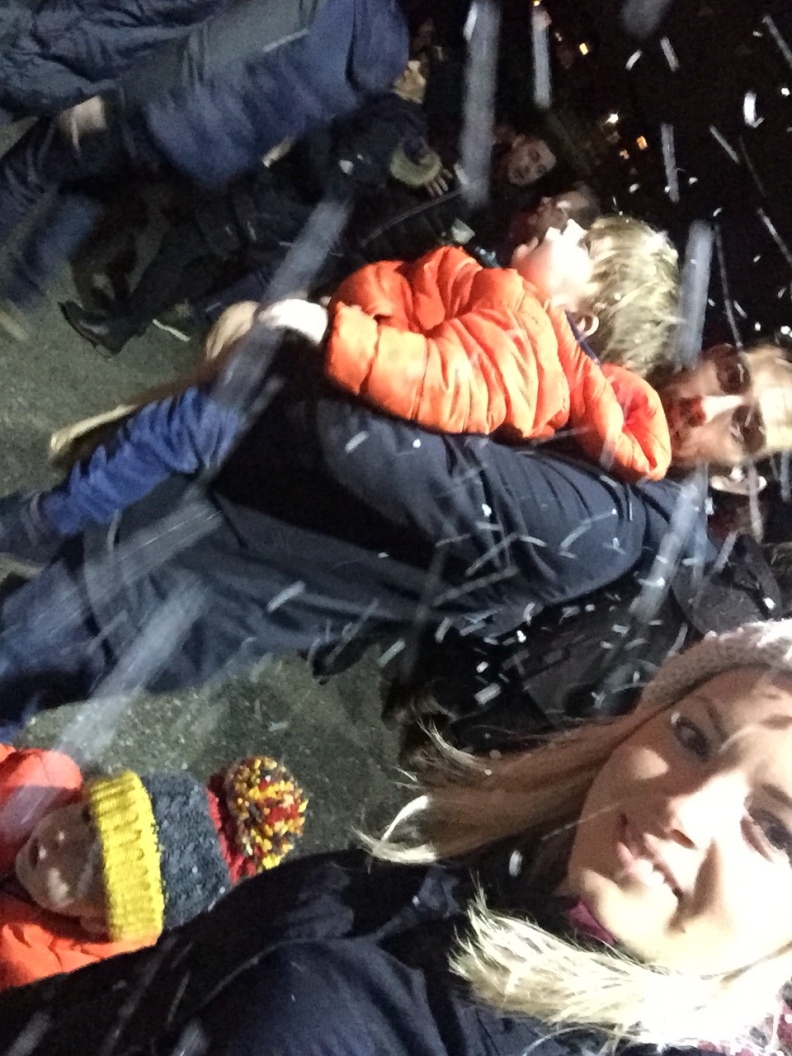 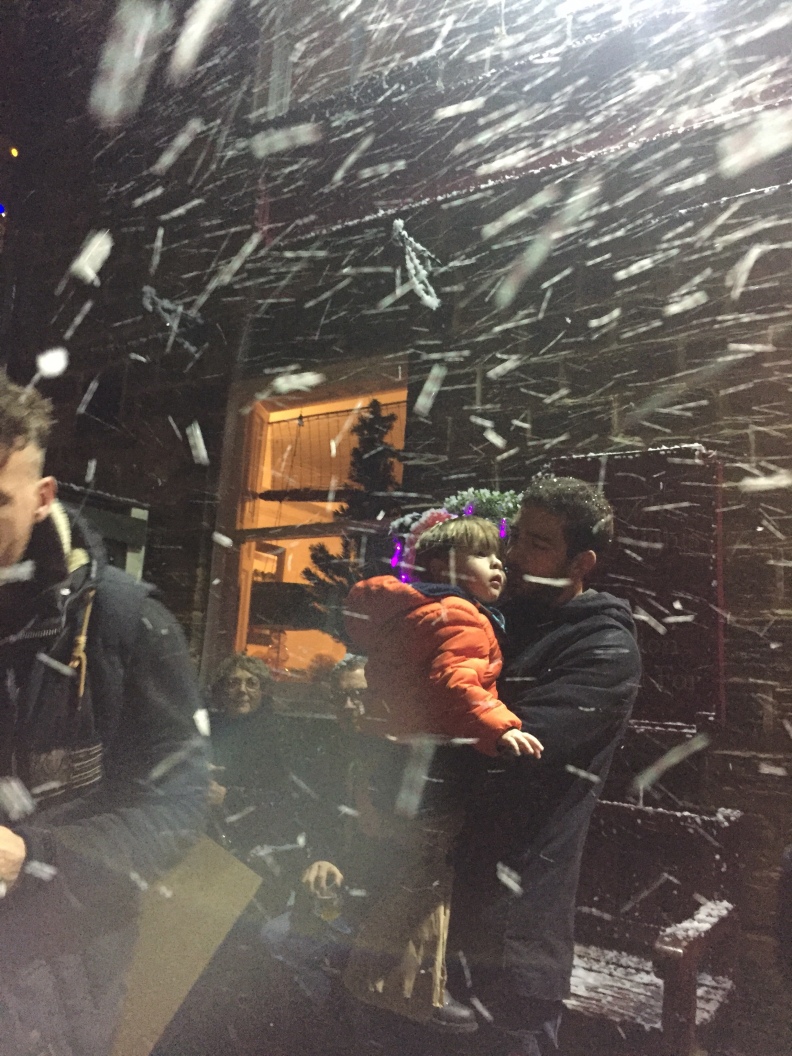 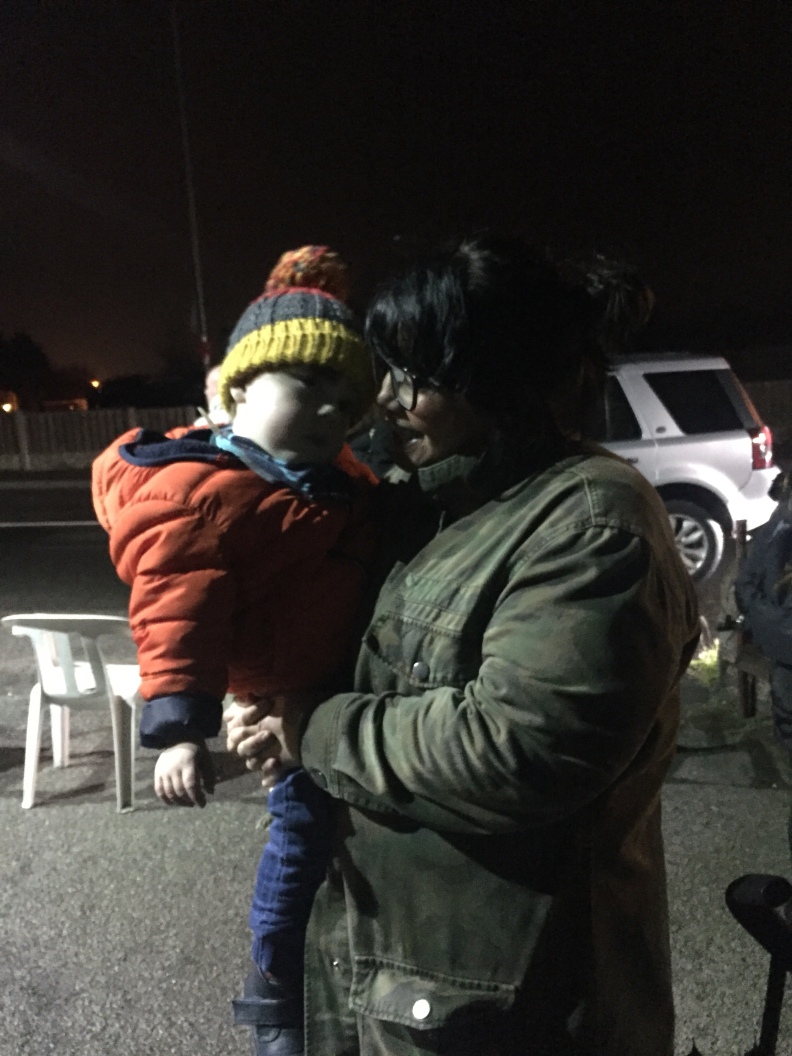 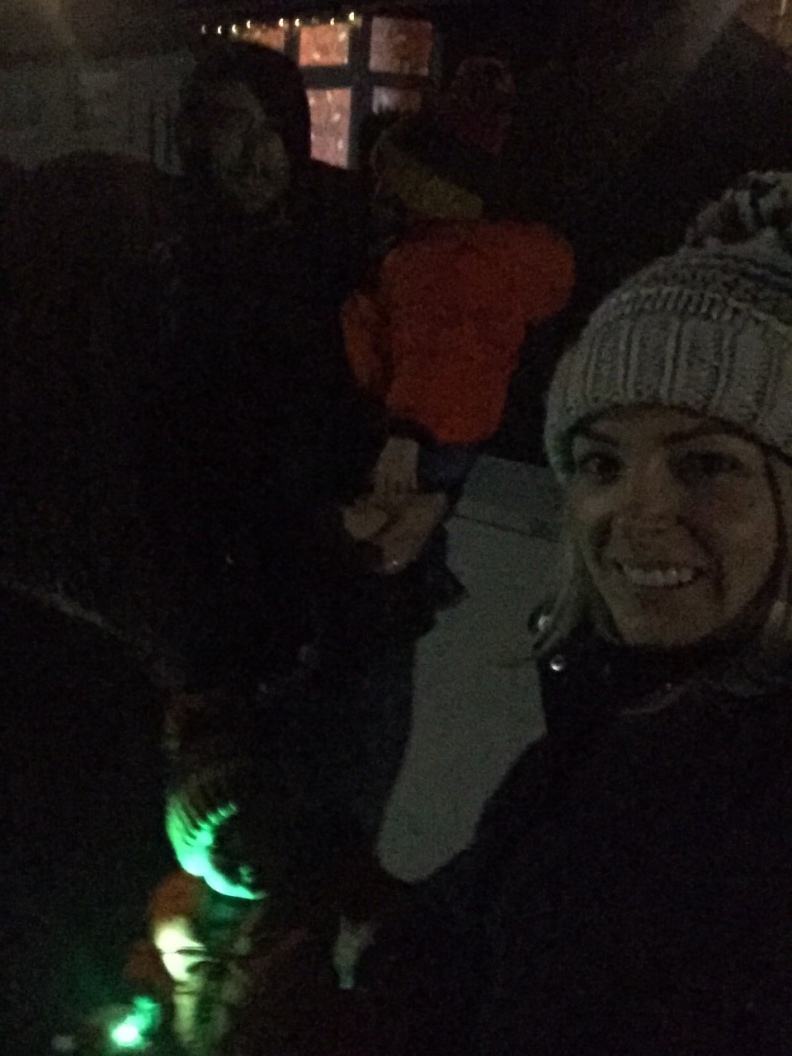 We walked all the way home, with the fireworks crackling behind us.

We were so happy, content and well behaved. No tears! Rory’s little face under the fake snow and both watching the fireworks – priceless! Rory’s confidence waltzing into the grotto, unshaded by Santa and helping himself to the contents of his sack! 🙈 Mummy and Daddy were so unbelievably proud! Perhaps now, Mummy and Daddy can start to plan more adventures without the constant worry of the unknown because of our limited social experience.

Tonight we made one huge lemon into the sweetest lemonade!