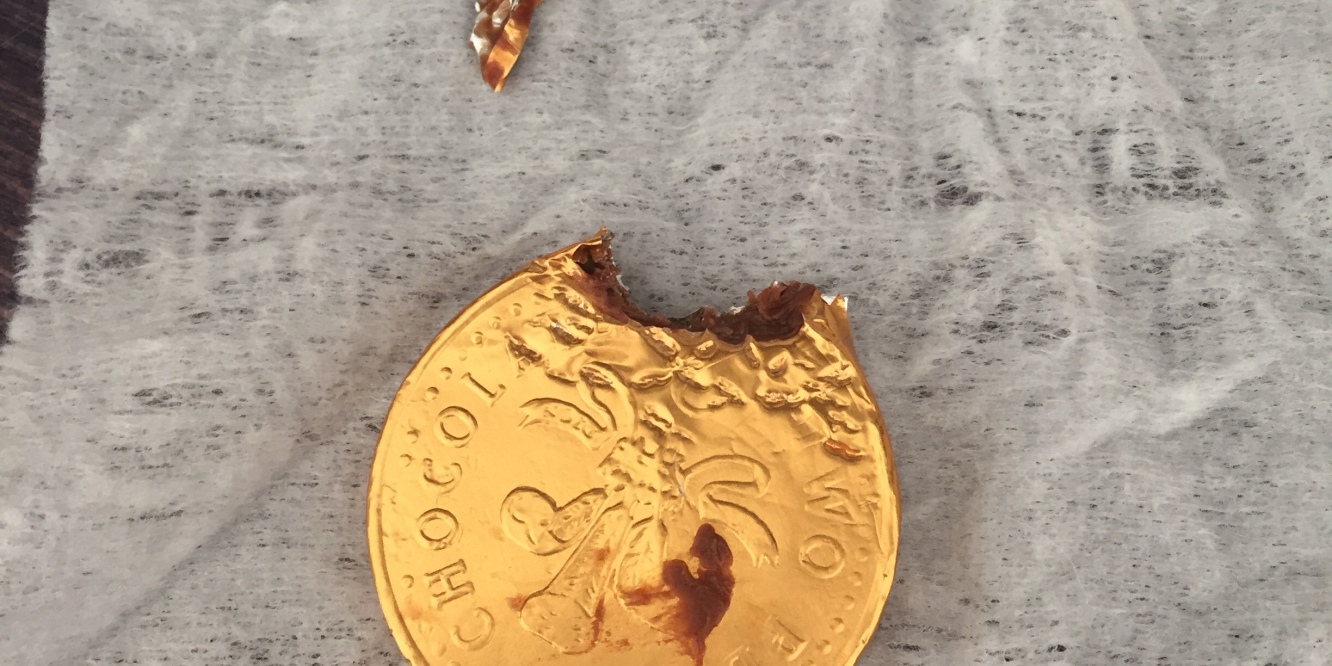 So after yesterdays successful hospital appointment, with a plan to begin ‘Operation Tracheostomy Decannulation’ in April, we see the world with fresh eyes. Or maybe tired, worn out, ready for s break eyes with a fresh vision!

We can go out. We can see our friends. We can live our life again. Until we get the date that is, and then we need to keep well again and give Rory the best possible chance.

So…Mummy sprung out of bed at 4:45am (not quite true, Daddy was on the sofa bed with Rory and Mummy chasing me around the bedroom until finally giving in and watching Peppa Pig on repeat in an attempt to get me to lie still until she could physically open her eyes enough to manoeuvre the stairs) and even ironed a shirt, packed all of our things and did her usual daily tasks with a spring in her step, because we were going back to baby group for the first time since July and she COULD NOT WAIT.

The baby group mums group chat was pinging until late last night and early this morning, today was a GOOD DAY!

Moral of the story, today was not a GOOD DAY, because Mummy totally forgot that it was not just the germs and the winter months that kept us away from baby group, it was the fact that she CAN NOT PHYSICALLY TWIN IT ON HER OWN ANYMORE!

And anyone that knows Mummy knows how big a deal it is for her to admit defeat and say that! Although, technically, she hasn’t been defeated because she went and we all survived. JUST!

If it wasn’t Mummy chasing us around the car park when we got there because trying to get us both out of the car (and the suction machine etc) with one pair of hands and walk us to the door (closing the car door with her foot and attempting to lock the car with her tongue whilst holding her car keys in her teeth) is a nightmare, it was trying to actually get us through the door in the first place, because when we saw the big open room and the different faces, we turned around to run back. Eventually (after about two minutes) we made ourselves at home – understatement. We went wild.

If it wasn’t us stealing dummies from babies in car seats, it was stealing them from bigger kids and making them cry. We stole bottles and mobile phones from peoples bags and had our hands in pretty much EVERY snack pot from every child in the room at snack time. Our own wasn’t enough.

We had lots of bangs and trips and falls, because Mummy physically couldn’t be in two places at once and despite literally not taking her eyes off us and wandering around from one disaster zone to another to prevent what she could see was about to happen, she wasn’t always quick enough. When she attempted to suction Rory, I was up to mischief and well…. She didn’t even get her hands on a cuppa, despite two been made for her and she ate cake like an animal with no hands, whilst Lynsey held the plate, because, well, she didn’t have a hand spare. (Thanks Jess for the cake and everyone for their big effort at welcoming us back). We often nap at the same time as the group, so it was no surprise that an hour in we began getting grumpy. Mummy cornered us and attempted to feed us a snack before putting our hoody on (when she could catch us that was and then attempting to get us both in the same spot, to hold both of our hands and make it back to car. We failed that bit and had a little help from Laura.

No sooner had we sat in the car than we dropped off and between the baby group mum group chat and Laura (who runs the group) a cup of tea was delivered to Mummy as she sat in the car park whilst we napped. Heaven! Mummy left the cup on the doorstep with a ‘thank you’ note and off we went.

I didn’t nap for very long and thought I would remind mummy for the rest of the day with little whingy noises and winding Rory up for entertainment.

Mummy attempted to go to the bank to pay a cheque in but despite driving round the one way system in barnsley 4 times, couldn’t get parked, so gave up. She took us to B&Q to take some things back for Daddy, we screamed and cried and pulled eachothers hair and jackets and caused a drama. Mummy then took us to tesco, we saw Elsie and her Mummy Faye and she could clearly see round two happening right in front of us, she even offered to do the food shop with us, but no, in we went, laughing and joking (Mummy & Faye) about ‘kids eh’ yet we had a holy meltdown despite Mummy feeding us wotsits and chicken nuggets all the way round (sometimes you just have to do what you have to do)…..

Apologies again the the lady and her family who Mummy almost wiped out when reversing out of her space earlier, if that isn’t a sign she needs a respite break – don’t know what is! Unfortunately Nannie & Grandad H have been poorly above a fortnight now! 😩

Once home, I managed to get the lid off the chocolate coins on our busy board and mummy found this in my hand, she panicked trying to get the foil out of my mouth but i thought she was trying to steal the chocolate so I clamped down really hard, I bit her…. 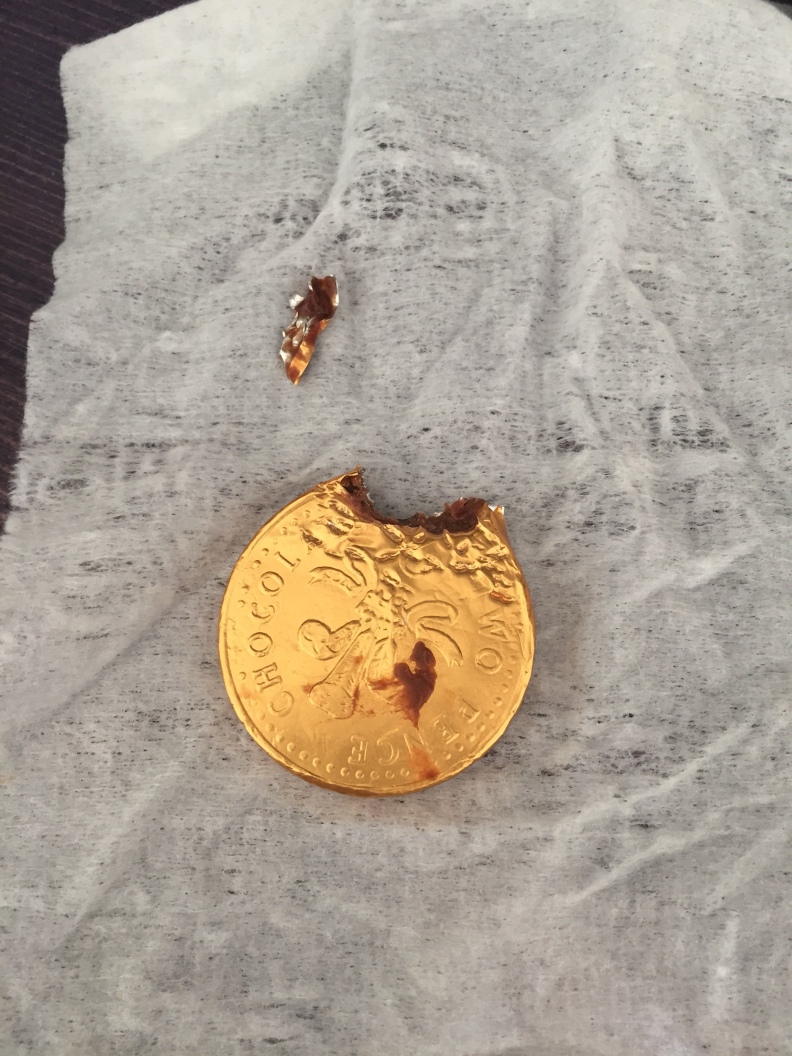 So, to all those Mummys at play group,  apologies, again, for my little bundles of fun. Bare with us, we have been stuck inside since July, this was a totally new experience for us, we are learning, I too have to learn how to handle my almost two year old twins, on my own, when they have the run of a hall rather than their playroom at home. I do have control, although it certainly, definitely, looked like I didn’t. I am not a woman on the edge, I love my children dearly, I appreciate your ‘I don’t know how you cope, ones hard enough, never mind two’ comments and the consideration for all the extra stuff we have to ‘deal with’ but we really don’t know any different.

To the staff and customers at B&Q and Tesco, hope you enjoyed the show.