What a week. Mummy and Daddy have found themselves asking how the eck they survived last year when they are already finding this winter tough and it is nowhere near as difficult as last year.

So…Monday came and we were poorly. Nothing major, just sniffles, but the emotional stress that this causes mummy and daddy is immense, the anxiety, the flashbacks, the knowing that ‘sniffles’ can very quickly result in a long hospital stay, oxygen and even intensive care and the ventilator. Reality! Mummy and Daddy feel a huge pressure as we haven’t had a Hospital admission since April and we are aiming for 9 months without one pending Rory’s scope in April next year where we will hopefully start the process of getting his trachy out. But I think this makes it worse – because we are trying to hide from the bugs and although Mummy stayed in ALL last Winter with us, she is finding it much harder this time around. So on Monday, Mummy didn’t see another adult all day, and we played at home and visited the ducks. 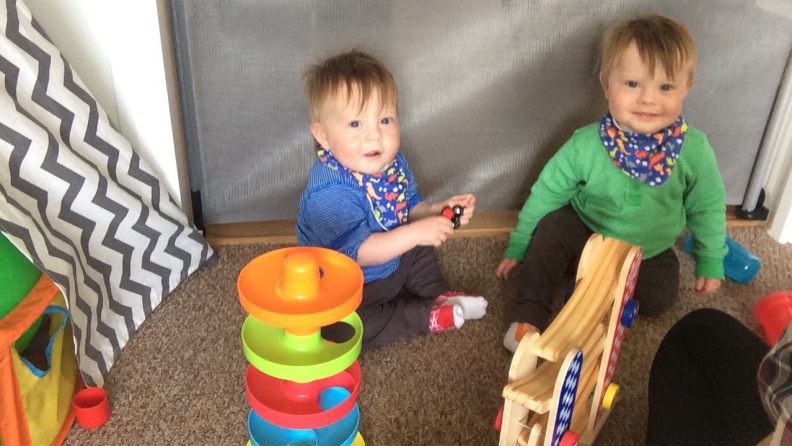 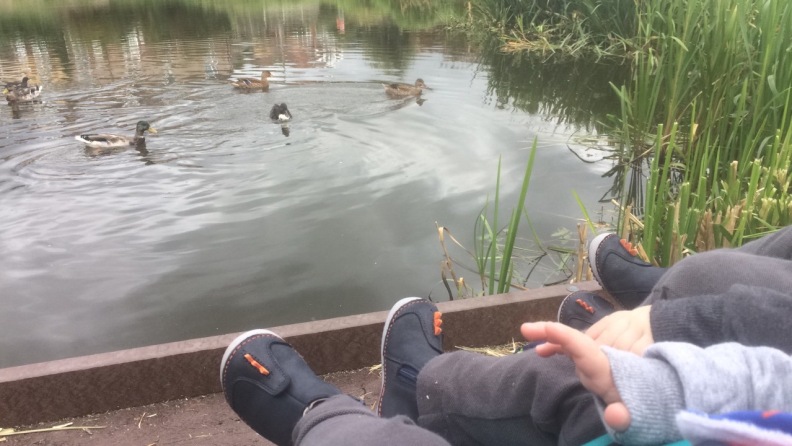 Mummy even managed bath time and bed routine with us both, all by herself. This is a handful with two adults. She managed to bath us one at a time, for safety, whilst entertaining the other, do Rory’s trachy cares whilst keeping Austin away, dried and dressed us, and fed us both, rocking us to sleep, one and then the other, whilst keeping the other quiet enough as not to disturb the sleep…..all went well until Mummy needed to suction Rory and it woke me up, then my crying woke Rory up and Mummy had it all to do again, on her own. Daddy walked in from work and asked ‘where are they’….he didn’t believe Mummy when she said she had by some miracle got us both to bed. Especially when we were grumpy because we weren’t very well.

Tuesday was another day where we played at home

and visited the park

and then just as Mummy was going out of her mind facing another day in the house with us, Auntie Vic text to say she would call in this afternoon. Mummy literally replied with ‘hallelujah’ and when she came, we played and then went to feed to ducks…

On Wednesday morning we were all entertained by the window cleaner…

And Rory decided he was a winner. He found a medal in the toy box and put it on. He literally kept it on all day, until bed time and Mummy took it off, he cried, so we had to hang it on the wall by his bed. What a star! 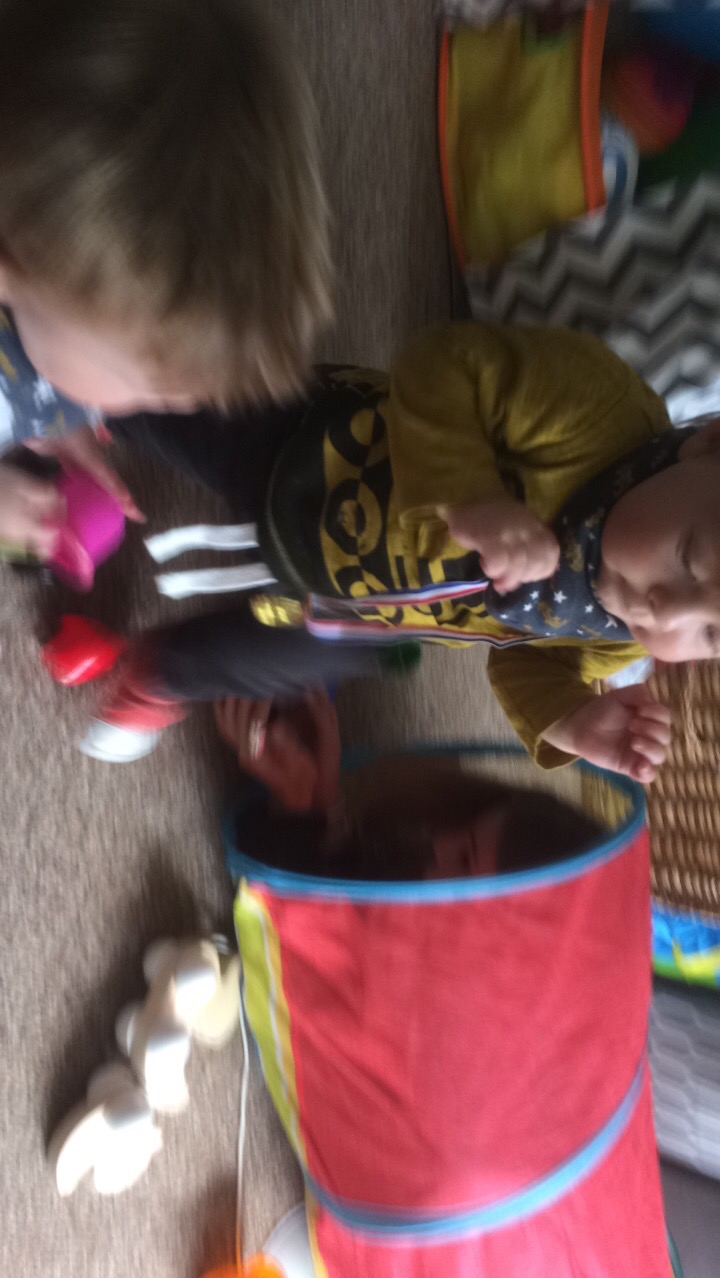 Mummys friend Emily visited too. She called to say a quick goodbye as she embarks on a new journey with a posh new job in London. She found time to test out our new tunnel though…. 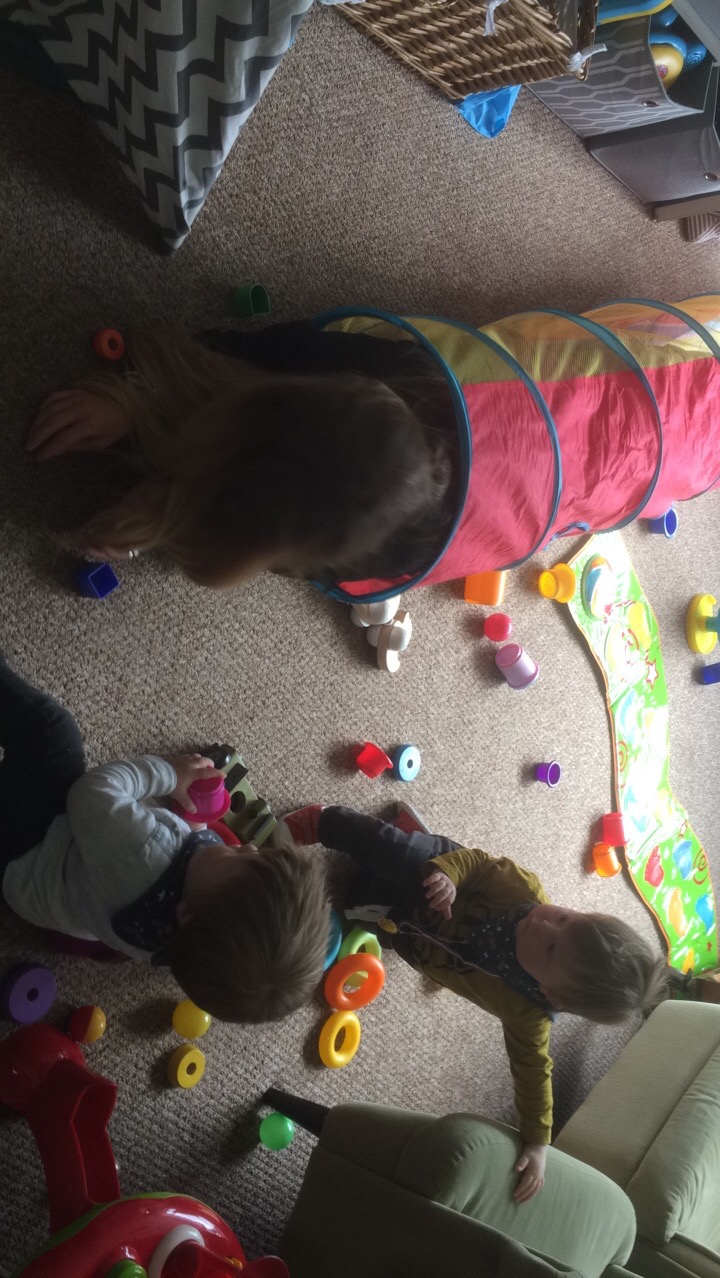 Thursday is our Nannie & Grandad Day. It was my turn, so Rory was having a Mummy day. Luckily I was feeling much better, just a little wheezy. Rory was a few days behind me and it always takes him a bit longer to get better. The weather was rubbish and so Austin played at Nannies with all of the new toys and Rory spent the day with Mummy, although it did go a bit wrong. Mummy took him to Tesco and he got to choose lots of new clothes for us, Mummy found a dinosaur range that she really liked. Rory was equally as impressed with the travelator upstairs.

After tesco, Mummy took Rory to McDs. It was pouring down with rain so they sat and shared a meal in their little car bubble. Mummy loves little moments like that, where the world around you is irrelevant and just in that small space, sharing some chips, whilst the raindrops run down the window, it was lovely. 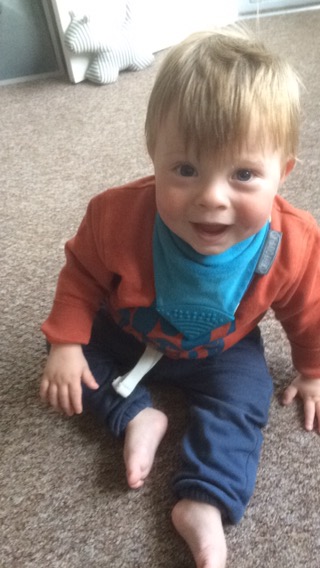 But then when they got home and Mummy suctioned Rory (he was having lots and lots of suction) she suctioned some green secretion, this has never happened before and so she rang the childrens hospital and bleeped the consultant. Mummy explained to him that Rory (& me) had both had tested positive for RSV 4 weeks ago and that we didn’t need any oxygen (which is a huge milestone and impressed him) and that we had been fine since, although since Monday we had both had a bit of a cold and that whilst I (Austin) was fine now, just wheezy, Rory had been working hard with his breathing a little bit, had been out of control with his secretions, to the point that Mummy drove us about a mile in the car and had to pull over 5 times to suction Rory and Mummy counted 27 suction catheters from one night (Mummy & Daddy have hardly slept) and so the consultant asked that we take Rory to the hospital and get him tested.

So Mummy sent a text out and Uncle Nath came to our rescue, he drove Mummys car to the hospital so that she could sit in the back and suction him when he needed it and they went to A&E to get his secretions tested. We are still waiting for the results, although he is getting less labour intensive with his suctioning and his breathing is fine. SO maybe he has pulled himself through it, we will have to see.

Friday morning came, Mummy received a pic of me eating my breakfast from Nannie. something really funny happened, Grandad was left in charge for 5 minutes and Nannie came back to find my breakfast and milk everywhere, and Grandad sat staring at the TV with his mouth open…..turns out, he likes Paw Patrol too.

Friday was a little random, we did lots of playing at home and then we went to the park with Becky & Louie. Except at first, we were all asleep and so Mummy & Bec ordered food and had a car picnic, like Chavs in the car park.

And then we woke up, fed the ducks, ran the grown – ups ragged around the park….

Our Saturday wasn’t so great, Rory hadn’t had a great night on Friday and mummy and daddy were super worn out. We were grumpy and Rory was quite wet. Mummy should have been taking us to Chatsworth to meet her friends, but there was no way we were up to it, and she couldn’t possibly have driven for an hour when Rory needed suctioning every 5 minutes, it just wasn’t sensible to go. So we stayed home. 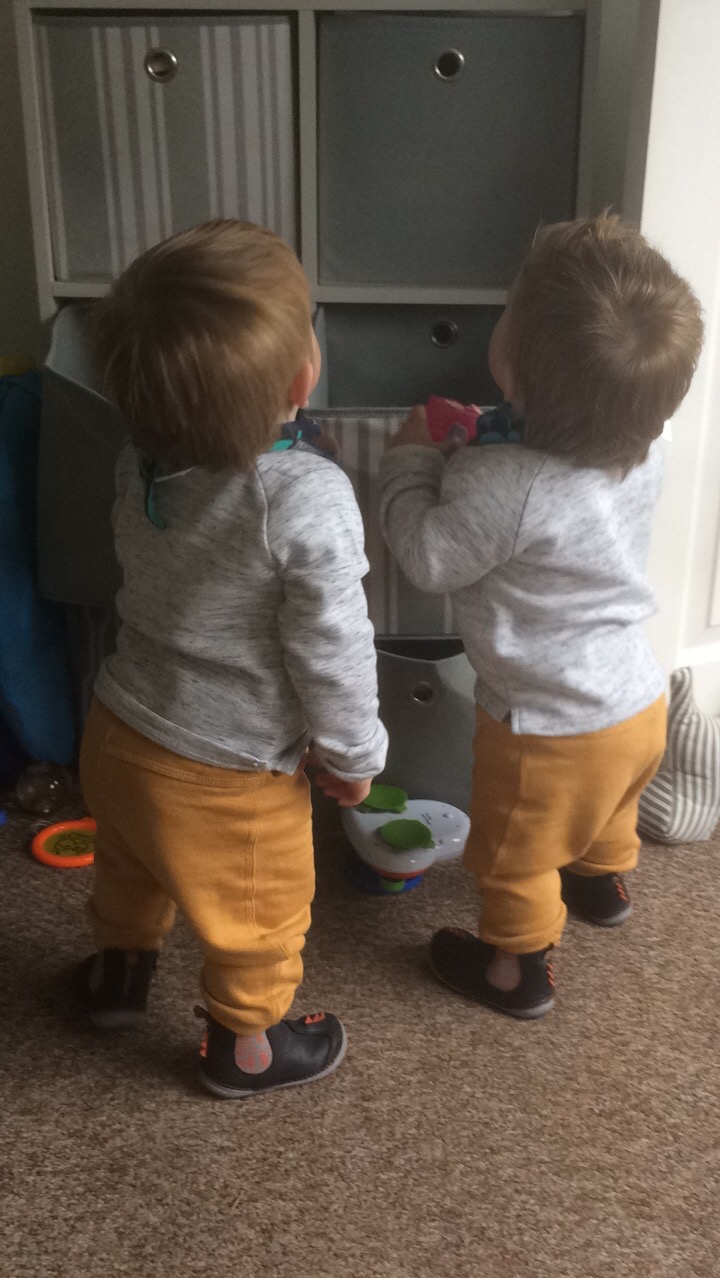 On Sunday the weather was great, Saturday night had been better and Rory was showing signs of improvement and because we both loved the Donkey ride last week, so much, and Rory inparticular gained so much from it, Mummy went on a search for donkey rides, except despite everyones recommendations and Mummy ringing round and then us driving around the world (and probably more miles than if we would have just gone to the seaside) we failed. No donkey ride! Except we stroked a horse (we found pony rides but weren’t old enough to ride) and watched other kids ride round the paddock…. 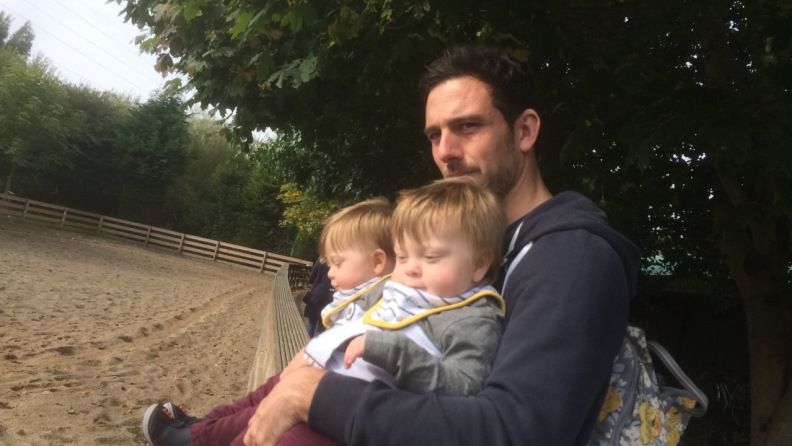 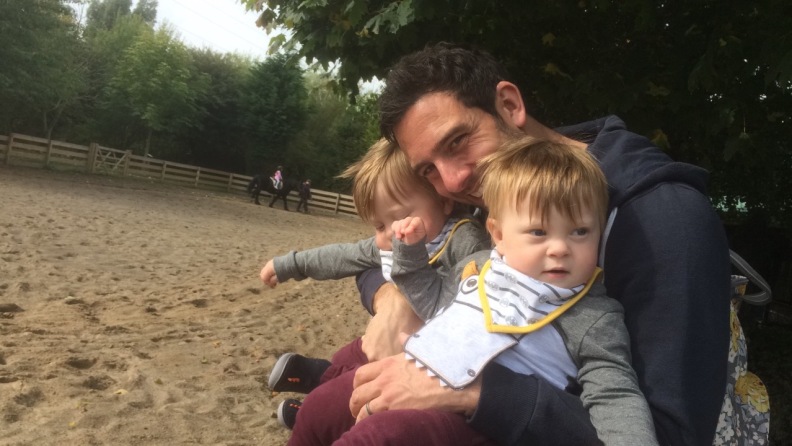 We had a lovely day regardless! 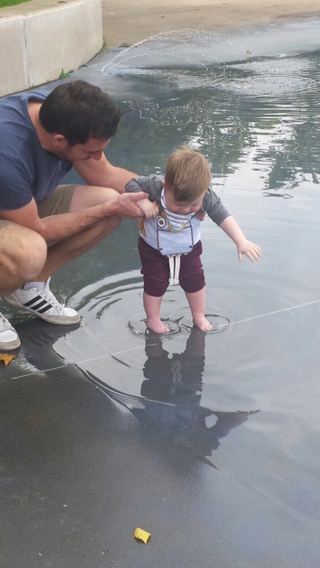 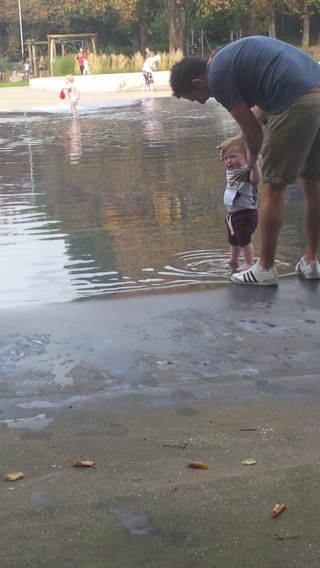 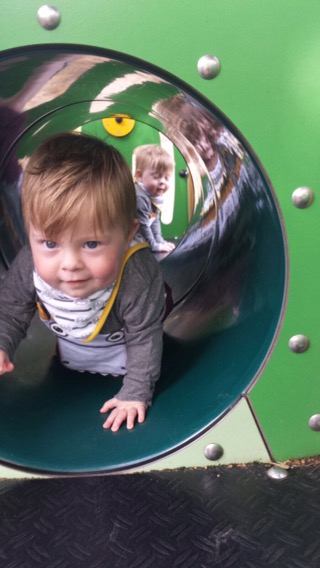 And it ended with two hours of Nannie & Grandad H who took us to the park whilst Mummy & Daddy had a gym, swim and sauna sesh!

Highs & lows of the week;

Whilst we are happiest playing in the play room with all of our toys, Mummy is really struggling with staying home and the winter has only just begun!

We didn’t like the rubbish nights, suctioning Rory and not getting any sleep.

We liked that there was some nice mild weather so that Mummy could take us out to the park and the ponds.

We liked that we made the most of the good days and finished on a high.

One week to go and we are half way through the term, with only 4 weeks until half term!