Despite the hard times had, the challenges current and the hurdles ahead……mummy is the happiest she has ever been. She tells people every day that she is wasted in teaching and that this is what she was always meant to be….a mum! However….whilst some would argue that motherhood alone (never mind with twins) would give your average day at work a run for its money….mummy decided that it isn’t quite as challenging as her job and as she thrives on pressure and targets she has injected her work ethos into our routine.

Starting with the morning target – can we all be up, washed, dressed, fed and downstairs with 24 hours worth of bottles sterilised, all medicines drawn up, mixed, prepared, all Milton steriliser pots changed, bins emptied, kitchen cleaned and dog walked by 9:15am?Daddy leaves at 7:30am. We have only failed on this twice and still managed by 10am. One being the other day when mummys fuel tank was empty. We were all ready and all jobs were done but mummy herself hadn’t got washed or brushed her teeth. Instead she was too busy holding her eyelids open. 😴😴 regardless, we were still out the house for 11:30am and everything was still completed.

Mummy also likes us to leave the house for fresh air at least once if the weather is suitable. Please don’t underestimate how much of a mammoth task this is when flying solo. Big sister Beau makes this even more of a challenge. Mummy is sweating before we are even the other side of the front door and we heard her telling our neighbours that buying a house on a steep hill was bad planning when you have almost 2 stone in baby to push around.

Mummy likes to keep our house clean and tidy and make tea for her and daddy but her favourite challenge (& ours too) is bath time. She likes us all to be bathed, changed and ready for bed for 630pm. This is a mad dash when daddy doesn’t get home until between 5:30 and 6:15 and he has to shower and change himself first so that he doesn’t share any school germs with us. Mummy and daddy bath with us, so it is a little harder with two of us than if she just put us in the bath. Mummy being mummy (those who know her will know what we mean) wanted to master bath time by herself.  So she created a little routine where she sits us in our bath seats on the floor by the side of the bath in nappies, wrapped in our bath robes. Mummy gets in the bath. She lifts one of us in, entertains the dry twin whilst bathing the wet twin, and then swaps over, gets dried and dressed herself before carrying us one at a time to our bedroom, getting us dry and dressed and then carrying us downstairs one at a time to be fed. Mummy says it’s exhausting but so much fun because we love the bath.

A nurse told mummy that she is the most laid back and organised mummy that she knows. Those of you that know mummy won’t be surprised about the organised bit, but laid back?!?!  Really?! Mummy tells us that this is because she has seen us very poorly and had some pretty hard times and so even though being a mummy is hard, it’s easy compared to the other stuff we’ve experienced so far. Mummy says this is the easy part. What are a few sleepless nights compared to years of IVF, a pregnancy filled with hospital stays and giving birth to twins at 26 weeks and not expecting them to come home….not to mention over 109 days in hospital and sleepless nights due to the worry of living every day as your last. Mummy knows this is temporary, it will get easier. Mummy doesn’t get stressed when we cry either, mainly because she has seen us sad because we are poorly, or having procedures that are uncomfortable or painful and so when we cry because we are hungry or just being grumpy, mummy just humours us.

A nurse told mummy that she should write a book to help twin mums to cope. Mummy doesn’t think she is doing anything special, but the key is being organised. So yeah…..I suppose mummy is laid back and organised.

So where are we at medically?

We had our bloods checked again and unfortunately our neutrophils have gone down even more, which means we are even more Susceptible to infection than we were, which when we are moving towards October when we are at risk of RSV, it is a scary time. Mummy needs to be even more strict with visitors, leaving the house etc.

Austin has conjunctivitis and a Hydra seal where his hernia was which may need surgery if it doesn’t sort itself.

Rory has gained a strawberry birthmark on his cheek and so it is much easier to tell us apart now.

Rory has managed to reach the half way mark between his discharge and his next operation on his windpipe. If he reaches the 5 week mark without a collapse then it can only be good. We just need to maintain him a safe airway until he is big enough for the big operation with long term outcomes. Won’t be long because we are such chunky monkeys.

The dietician says it is unknown for babies to maintain their centile like we have. Especially extreme prems or even twins like us. We have exceeded all expectations. Mummy and daddy team talk their way through the night feeds. They say that if they have to feed us like this with no sleep for the next year at least we will keep growing and we will get stronger and therefore better.
Anyway…….what have we been up to?

Sorry if we forgot anyone. We have been busy bees. Making the most of dry days and germ free fun. Mummy possibly is a little more laid back than she should be but mummy is very risk averse and doesnt see any harm in us going outside in the fresh air, or a handful of special people being allowed to visit. This is set to change though now the weather is rubbish and we enter October. Lots of indoor fun with mummy until February when we can explore the big wide world properly.

So..here are some pictures from the fortnight…. 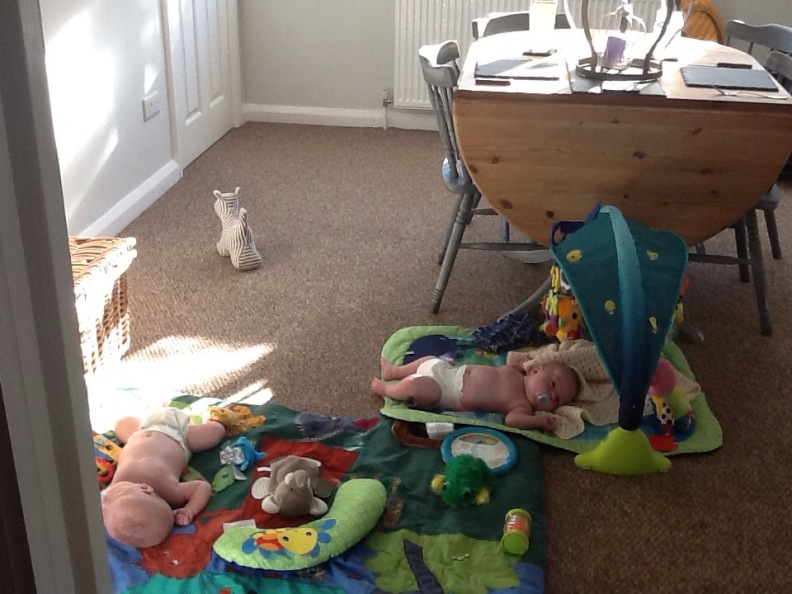 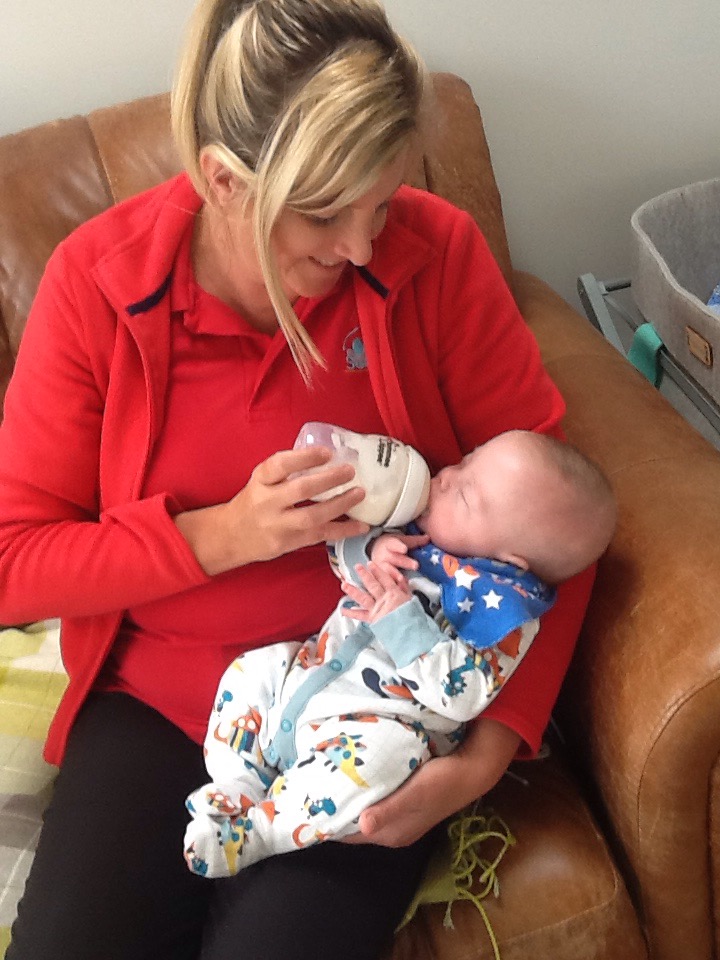 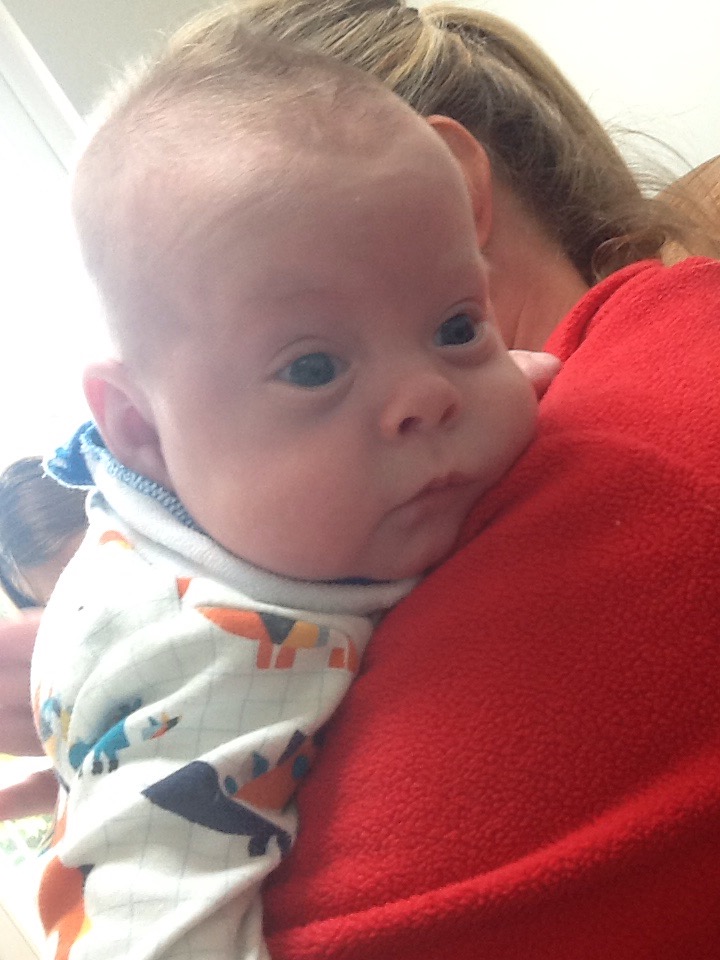 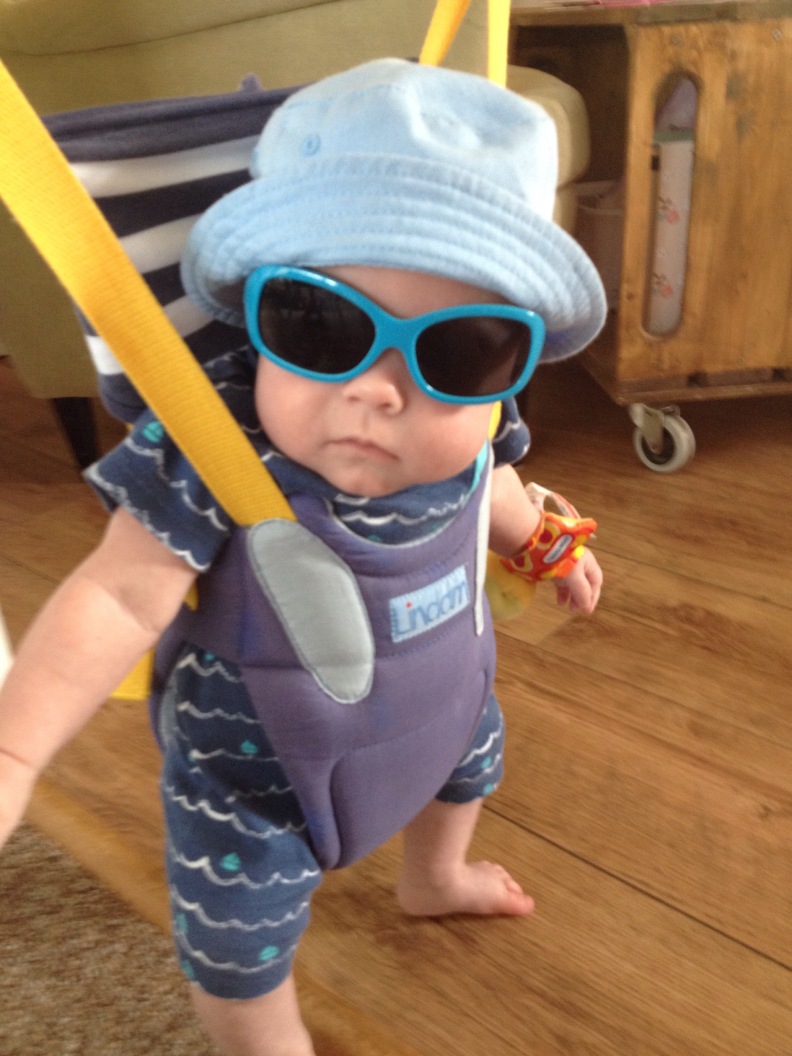 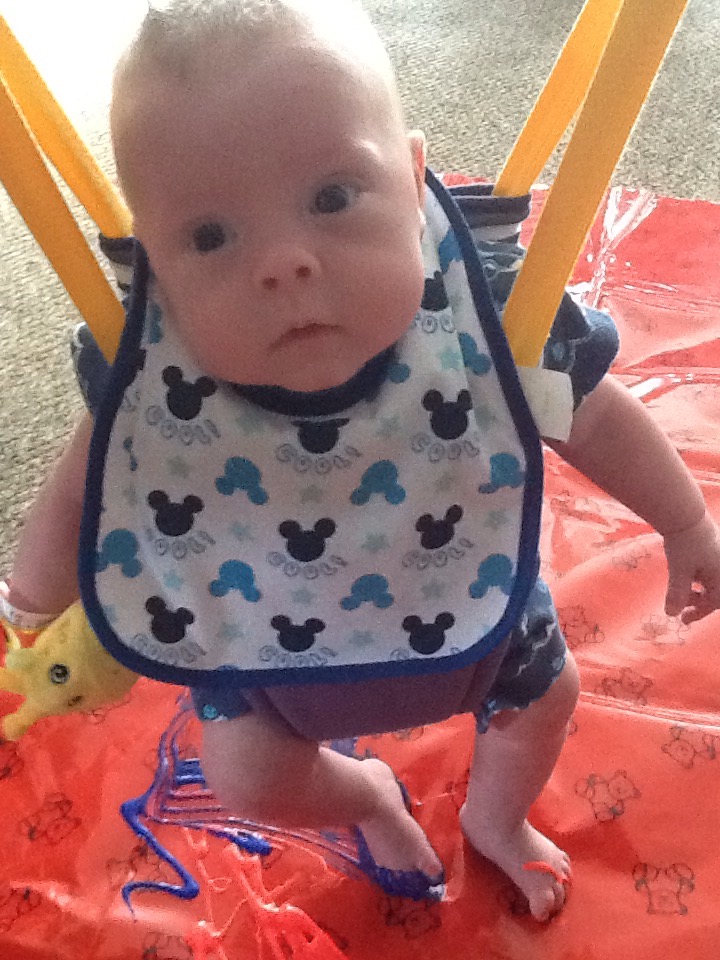 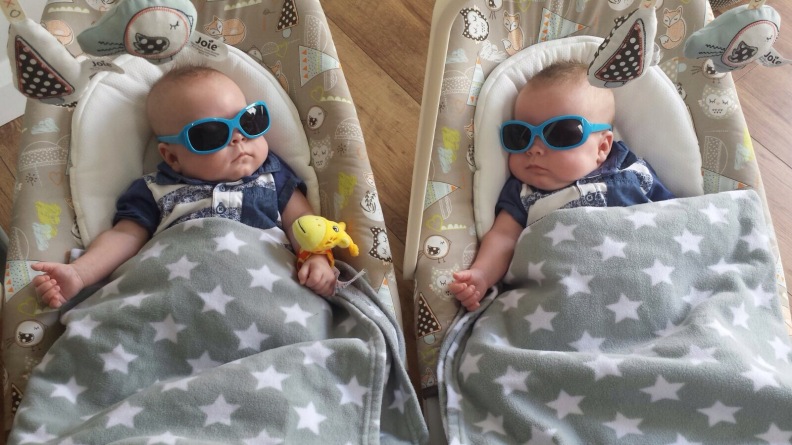 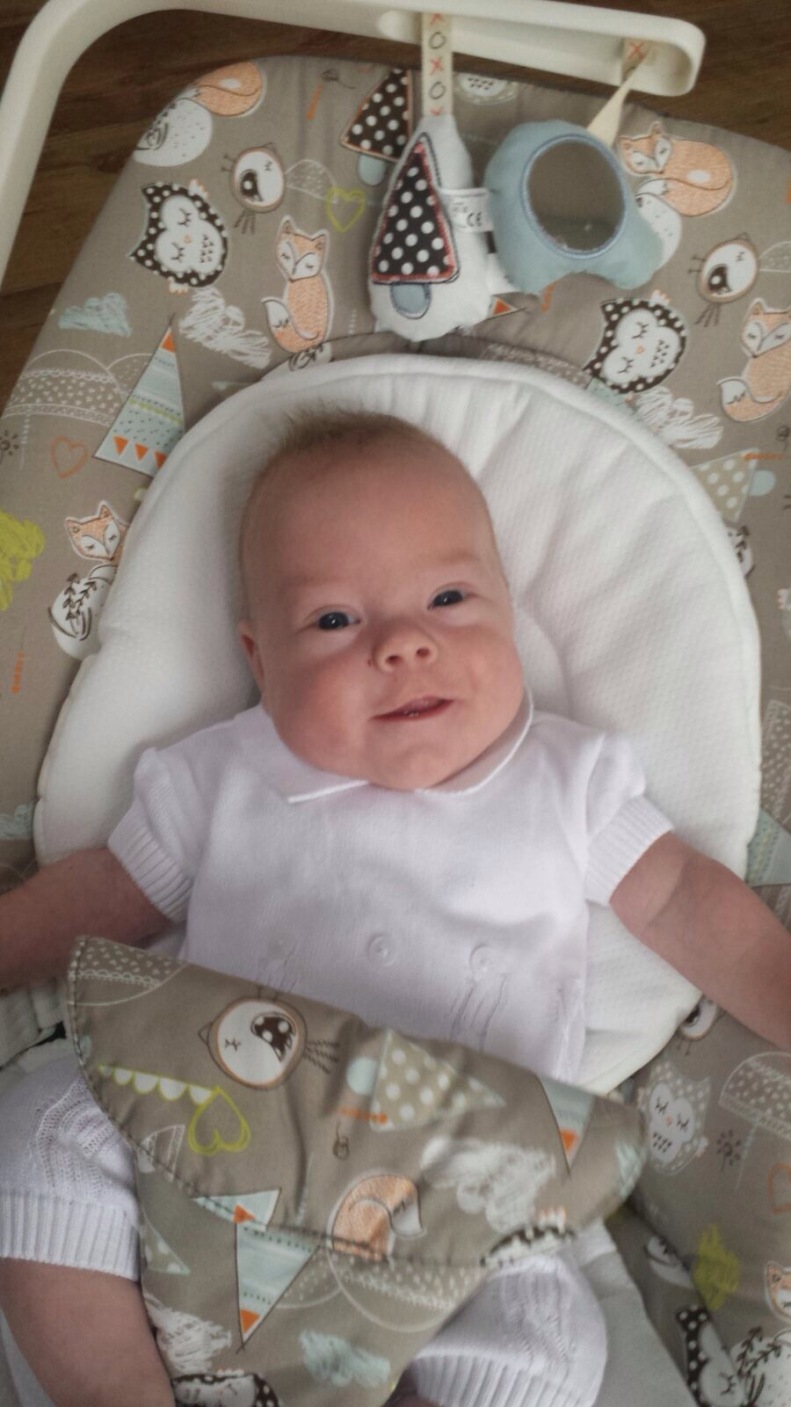 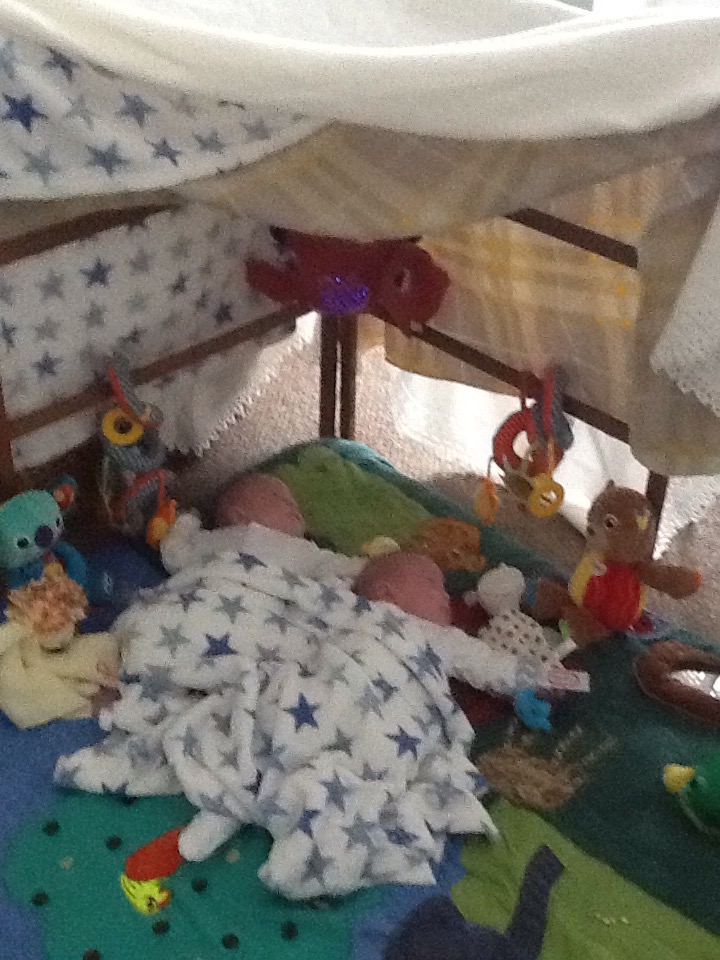 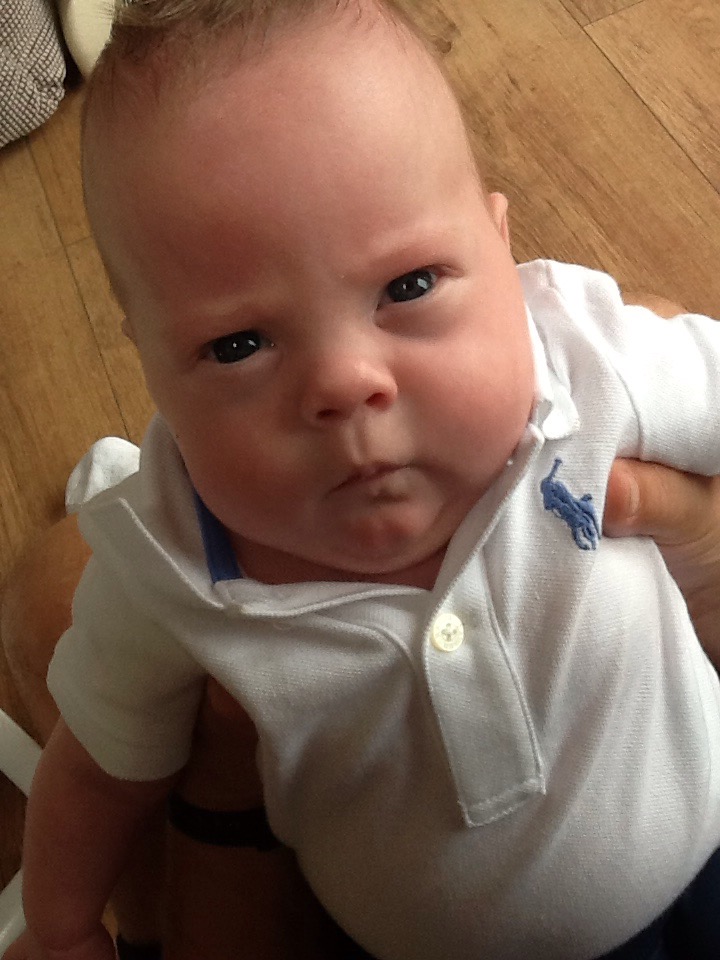 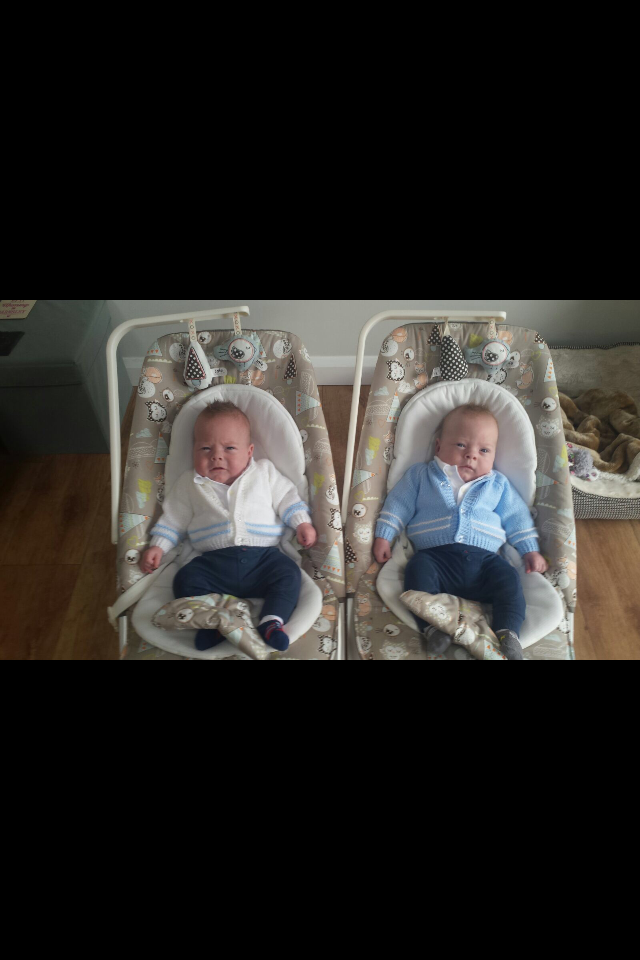 Mummy isn’t perfect though even though no matter how tired she is, she switches on her CBeebies act and is super calm and patient with us. Mummy sometimes gets frustrated when we take so long to feed in the night. Often testing out her behaviour strategies, giving us two choices where both suit her, giving us a stern talking to, or just giving us that look. She once bit Austins finger by accident because he put it in her mouth when she was kissing him and pretending to eat him all up. He screamed. No guesses who got the bad mum award and suffered from mum guilt. She often addresses us by the wrong name in front of people (daddy does this too)  and on more than one occasion mummy has bashed us into the door because she can’t  physically carry  both car seats at once. We are just too heavy. It is also rare we both get all of our medicine all at the right time in a day. But there is lots, and we do get it eventually.

Mummy gets frustrated with people and their sweeping statements. You’ve got your hands full. How are you coping? Double trouble….you are going to know about it when they are mobile. I’m glad I’ve only got one…..it goes on and on.

Actually, mummy feels like the luckiest lady in the universe, her heart is full along with her hands, double trouble but double the fun, mummy can’t wait for us to be mobile because she won’t have to make two trips everywhere to move from one place to another and mummy has nothing to say on the latter, other than that she is also glad you have just one.

Peoples opinions swing from having no appreciation for how difficult (well it’s not difficult….just time consuming) it must be not only with two babies but two poorly babies…..to giving the impression that everything must be an inconvenience with two and that twins are a burden.

As for how mummy is coping, From day one of getting us home mummy has flown Solo when daddy has been otherwise engaged and so It was no big shock when daddy went back to work. Everyone assumes Nannie Di is attached to mummys side but that couldn’t be further from the truth, in fact Nannie was poorly all last week and  so not allowed to visit. She is always on call if we need her but mummy has got it in the bag, apart from feeding, mummy finds feeding us both hard. Especially if we are both hungry at the same time. mummy says twin parenting is less emotive and more target driven, ticking boxes for giving of medicines, feeding, nappy changes etc. Sad but true. The hardest part is not being able to hold and cuddle us both at the same time and more often than not one is left crying because when their is only one grown up, that’s just the way it is.

Mummy is teaching us to be patient though, she gives out verbal certificates for patience and chooses a star of the day for when daddy gets home. It’s usually Rory.

It was daddy’s birthday this weekend. Mummy and daddy went out for tea & drinks on Eccy road. Mummy bathed and fed us, got herself ready and ironed daddy’s shirt all before 430. They left at 5 and were back for 830. We had fun with Nannie and grandad. They were so excited to look after us without mummy and daddy. Mummy and daddy had a good time too.

Oh and guess what…….. We had our first try of food last night on daddy’s birthday. We fed from a spoon like its the norm for us. There is no Stopping us now!