I apologise if you were looking forward to reading a baby blog tonight….instead I, mummy, feel the need to give some recognition to the big lad in our little family….daddy!

To say the least, I’m a control freak. I like things done a certain way. I’d always rather do it myself. I often wondered how this would turn out….becoming a mother of twins.

As a wife, teacher, daughter, sister, I’m much the same, although I’d like to think I’m lots of other things too, nice things obviously! 😅

A friend once said to me…run a tight ship and you will sail far and I reckon there is truth in that.

So….going through the IVF daddy was pretty useless, I mean not that he could be useful really, it was me who had to inject myself. Me who had to be scanned sometimes 5 times weekly, me who had the ‘procedures’ done and so in terms of being useful, all he could really do was be there for me. Of course he was, but along with many of my friends and family with no personal experience, he was useless. I mean, how can you truly help if you dont truly understand?

When I fell pregnant and spent much of my pregnancy in hospital or on bed rest, he was a rock. Reassuring me that everything would be OK, even if it wasn’t….going to be ok. I knew we’d be strong enough to deal with it. We’d had lots of disappointments and sad times so far and together we were strong enough to pick ourselves up and try again. Probably because we had each other. He was so practical, working all day, visiting me at the hospital, taking care of things at home and looking after Big Sis Beau Jangles. Forcing me back to A&E when I refused to believe I was really THAT poorly. I would sob watching him drive out of the car park whilst I spent yet another night on Ward 14 attached to a drip and pee-ing in a cardboard pot. Not sure if that’s because I’d lost complete control of the situation though 😄!

When I went into labour, the whole situation was completely out of my control and as I was put to sleep after the birth for my operation, I had no choice but to give over the control of everything, something which I have never done before. I trusted him to go with the boys and make sure they were OK, and be able to make any decisions about me or the boys and our care because I wasn’t physically able. He was nothing short of amazing. He whizzed between me and the boys, checking on us both. He took lots of pictures and brought them to me when I’d come round, he helped me bath, get dressed…eat. He pushed me down to meet our boys and he pretty much took complete control of the situation, even though I know he was petrified inside and well and truly out of his comfort zone.

We have been really lucky that Ashs work have been completely supportive and I will never be able to repay their kindness and will forever be grateful for their support. Because of this, he has been there for me, and the boys, every single day. There have been many many times on this journey we didn’t think our boys would make it home and it is great he was able to spend precious time with us. He took over when I needed him most. He made sure we were OK and put himself last.

My Dad is my absolute idol, but I have to say, and I truly mean this, I watch in awe….Ash is the most hands on father I have ever known. He knows everything about their health, measurements, medicines…..he remembers all of the numbers and he knows them. He knows when they aren’t themselves and he trouble shoots. Now bare in mind most parents troubleshoot for wet nappies, hungry babies and temperature….we are talking blood transfusions, oxygen saturations, apnoea attacks and so on. He is not a medic! He has watched, asked questions and had a go! Everything was new. He has never really been around babies yet he is somehow the boys favourite. They settle so well for their daddy. I look to him for reassurance….when the hell did that happen?!?

I guess what I’m trying to say is, I genuinely could not be this strong without him. I could not wish for a better daddy for my boys. I could not do any of it, without him. He’s so gentle, loving, kind. Observant, strong, protective. Selfless. He’s my wingman!

It absolutely melts me when I see my three boys together. I’m like a spare part. They have such a bond already and I can’t wait to watch it grow!

So….today, we found the boys snuggly, having survived the night at Barnsley. 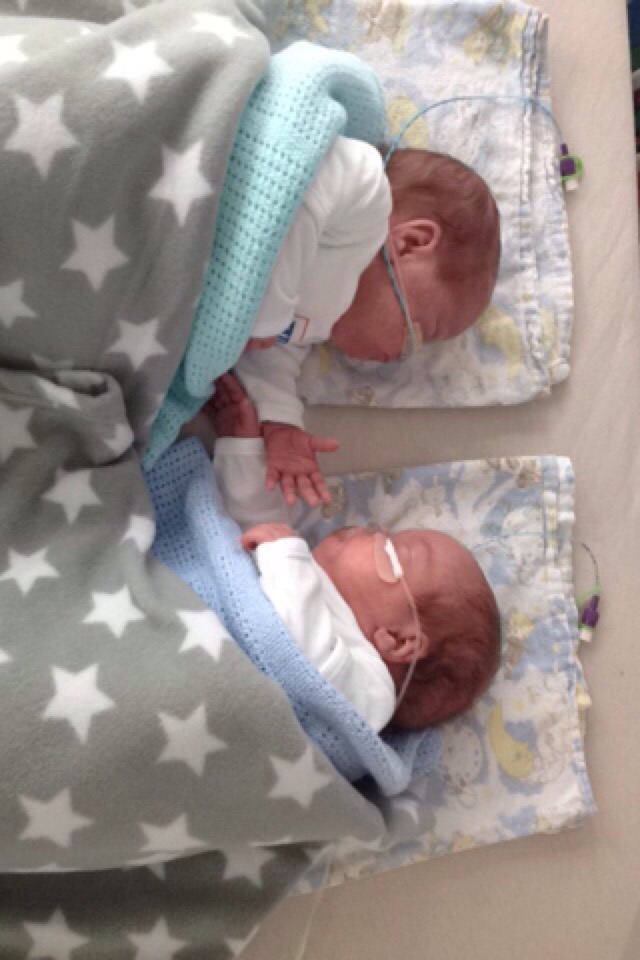 Daddy fed the boys a bottle for the first time….natural!

He changed them too.

The boys bought him an England shirt for Fathers Day and I had England vests made with the boys name on, I had plans for a nice picture, to be printed on canvas at home. They shared this moment….

The boys had lots of rest, prem babies like ours need lots of rest to get better and grow. We had their first bath planned for 5pm.

Unfortunately in this time, Austin Fell a little bit poorly with an unsettled heart rate and it was felt best not to push him. It was also his first day without caffeine. Something so normal, most parents take for granted, yet almost 10 weeks of waiting. It’s a good job they don’t stink.

Ash took off his shirt and held Austin close…he settled. Just like magic.

I think I’ll go back to work and leave daddy to it. 😂

Thank you Ash! My superman! Our hero! 💙💙