Yesterday was not a good day! I had absolutely nothing to blog that was worth reading. Nothing inspirational to write. No words that would have made comfortable reading. I just wanted the world and everyone in it to chuff right off! I put my fingers up to the 5 logics. I didn’t care that people were worse off, I didn’t care that I couldn’t control it, I didn’t care for any of it….I just knew I couldn’t do this anymore. I have often wondered if there was something wrong with my parenting instinct. Why I was coping so amazingly when everyone was expecting me to struggle. I’ve always been a strong willed, determined soul with the resilience to cope, a waterproof skin. People who know me, know that, but yet so many ask me every day how I’m doing and offer support, as if they were expecting me to break. I’d read blog comments about people with shiny eyes and I’d read back what I’ve written and think why….I didn’t find it that shocking, and I’m living it. I’d come to the conclusion that it is because this journey is all I know. Yes I feel robbed of the conception, pregnancy and motherhood beginning that most experience, but I can’t miss what I’ve never had, there were times where I never thought I’d be a mum and so if being a nicu mum was the only way…then so be it. If I was only able to be a mum for a short time, it’s more than I had before and I felt blessed for every day. But yesterday, yesterday was different. I even asked for help. Now it has to be bad for me to ask for help. Sometimes I’m so pig-headed, little miss independent, rather struggle in silence than admit defeat. But yesterday….I text my nearest and dearest and asked for help, I had 100’s of people I could call on, I’m blessed with such an amazing support network but I didn’t even know what would help, there wasn’t anything, I just felt like a rabbit in headlights and I couldn’t do this journey for one second more! I wanted out!

So…what drove me to that point you might ask? You may have read my last blog ‘womb with a view’ Austin was flying on his high flow, Rory on a special care chart, on low flow oxygen, trying his first feed, both boys in an open top cot, regulating their temperature, wearing clothes, having daily cuddles…..I wrote about feeling like a normal family and spending quality time together. Well…I went home Monday night feeling quite content and I went to bed, confident I’d get a good nights sleep.

In the early hours my phone rang and woke me up. I was in such a deep sleep I had to wipe the dribble from my cheek. It was the nurse looking after the boys. Both of them had taken a turn for the worse, with Austin having Brady’s, desats and apnoea attacks and subsequently put on high flow 6 from high flow 3. The scary part – Rory had stopped breathing, the nurses had to neopuff him until the Dr could come and fit him with Bipap. He was put back in an incubator, stripped of his clothes and given antibiotics and a blood transfusion. Now Rory being the strongest….it was 6 weeks since he was last on Bipap….he was 10 days old when he came off the ventilator and it had been a long, hard, emotional 6 weeks. It felt like we were right back at the beginning and with only 6 weeks to the due date and already a prediction that we wouldn’t make it home in time, it felt like we would be stringing up the bunting in room 2 for their first birthday. Even more so when Dr Clarke mentioned putting him back on life support.

So….we rushed through to the hospital and found them like this… 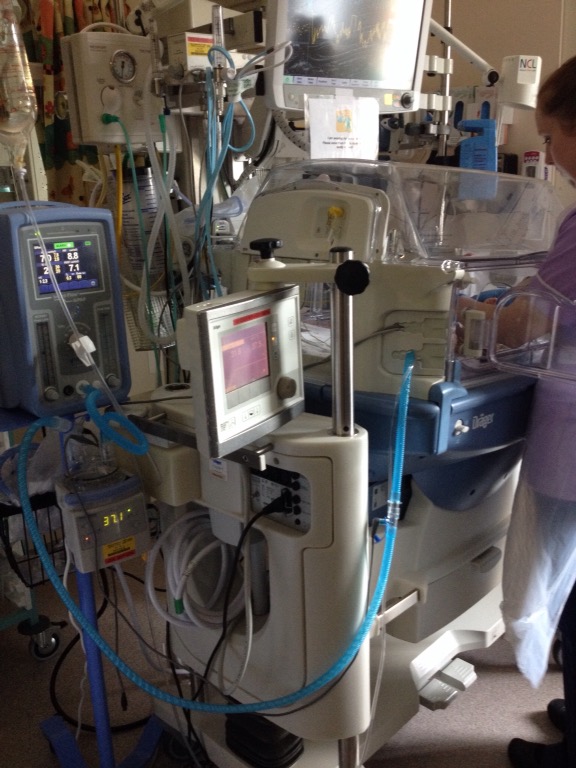 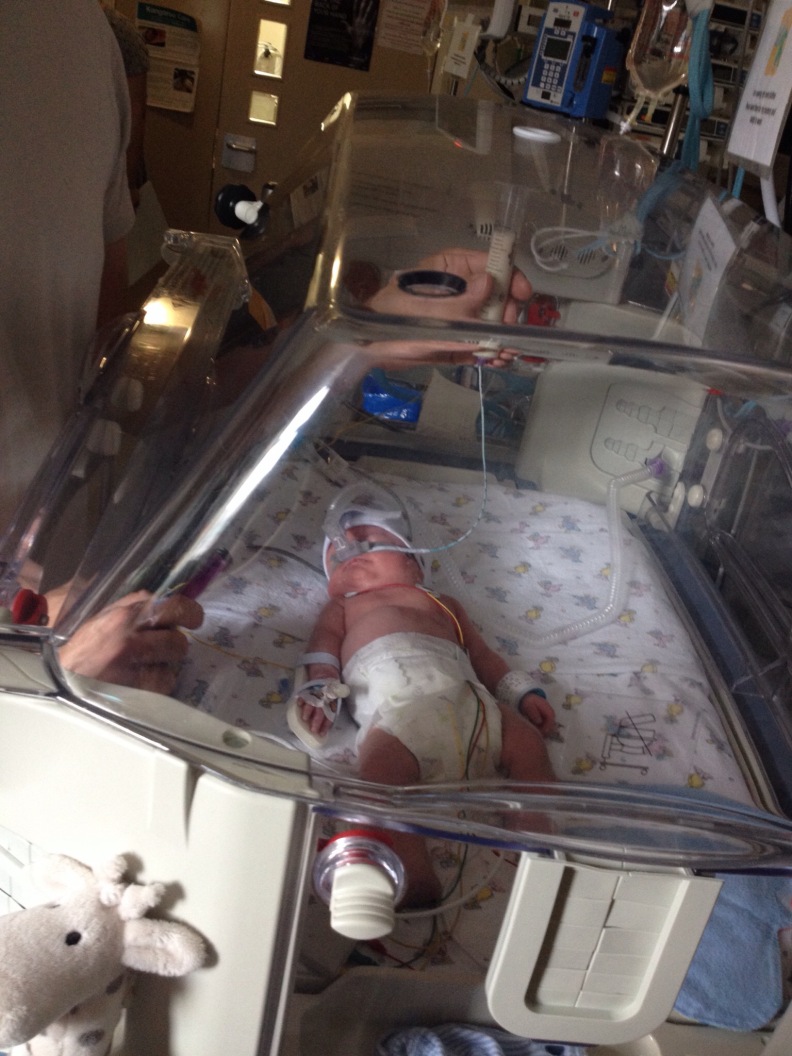 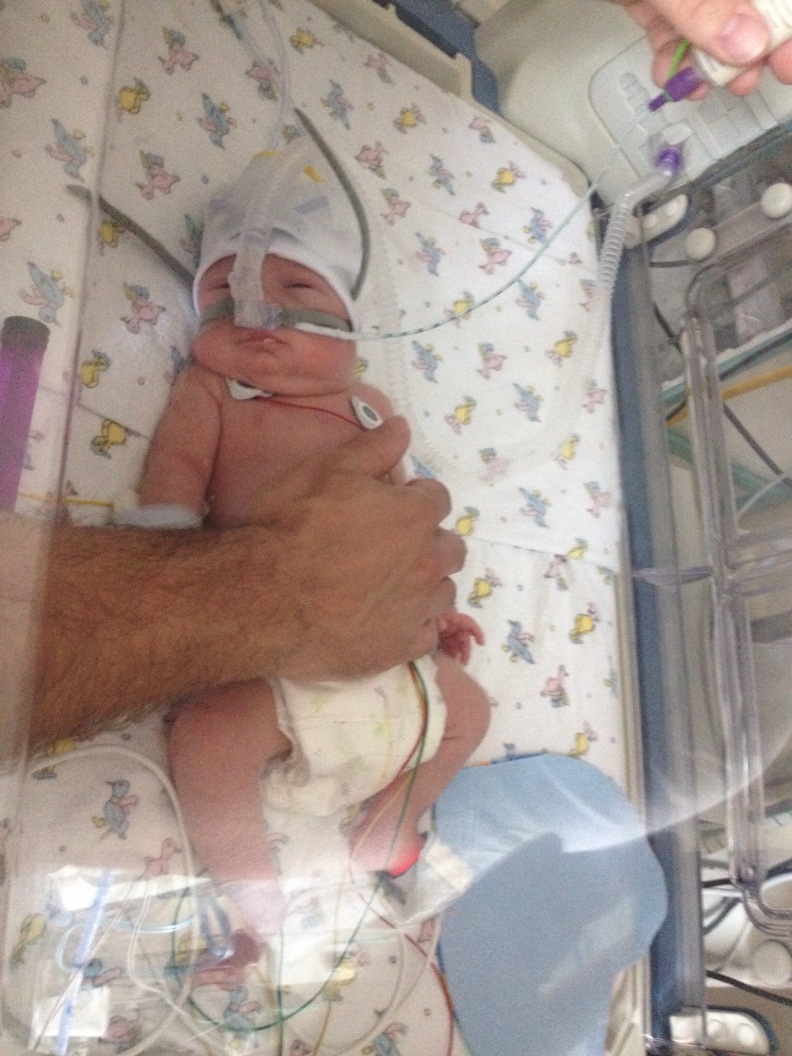 Poor Austin looked so alone in that twin cot and I found it so hard seeing them separate again. I looked at ash who was holding back the tears and asked him if he was ok, he shook his head, so I offered him a comforting arm and assured him it would all be ok. I didn’t know that. I didn’t believe that. I lied. He asked if I was ok….I lied.

We stood there watching them, Rory’s machine constantly flashing and beeping, Austins unsettled too but not as bad. Trying to ignore the machines I stared at Rory, watching his chest go in and out, up and down….then it stopped, he lay there still, lifeless, the machine beeped, the nurse came…..he breathed again. He stopped. He breathed again. He stopped….Simon Clarke came and observed. The decisions were made for his care. We moved on to Austin. He appeared to be OK.

I sat back in the comfy chair for a moment, just as the bliss nurse walked in, her job is to take care of parents, she has been amazing, although I’ve never really ‘needed’ her, apart from the day my boobs were so engorged I was mistaken for Dolly Parton. Yet she only had to look at me today and I broke…..I sobbed pathetic little weepy tears and held the flood in.

There was nothing we could do for the boys and it wasn’t doing us any good been there so we came home. Ash decided to paint the ‘boy hut’ (not allowed to call it a Wendy house and they are too young for a man shed) so that he felt he was doing something for them…. 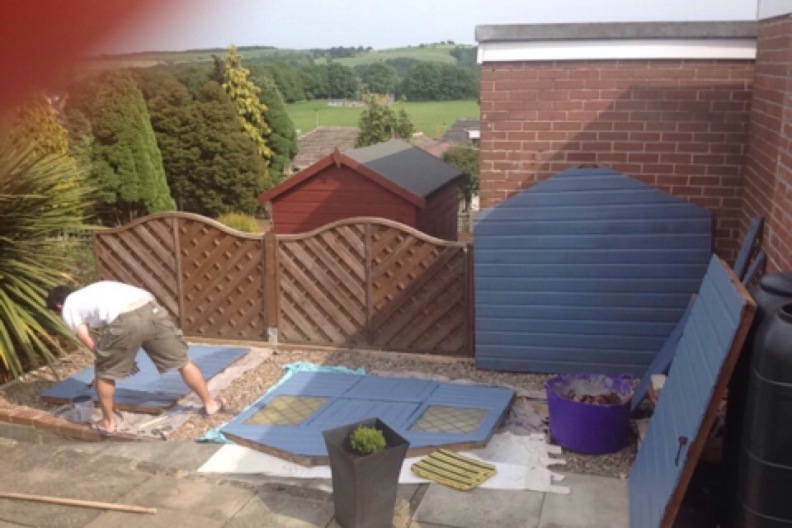 I stood and kept the cleaner company who was cleaning my oven. It was refreshing to talk about something else and pretend it wasn’t really happening.

Then the phone rang, Austin had taken a turn for the worse and was also in an incubator, naked, with antibiotics and Bipap. They were unsure if this was a reaction to the immunisations, or an infection, so they covered all bases.

We went back to the hospital…

There was nothing we could do. We went home.

I made a pit stop to see my other family….the Armos, thank you Chloe and Mandy – I’m so glad I did. A different place, different faces, new conversations…..and a late night. So rather than rake everything back up again in my fragile state of mind, I thought balls to the blog and went to bed.

So today – Wednesday – we would mostly be learning how to resuscitate our boys. The hospital had arranged for a guy to come in and teach us. There’s not much more I can say to this other than that I can resuscitate a doll but will probably forget everything when the real event takes place. So I put a prompt sheet in the changing bag and on the notice board in the hallway at home. I don’t imagine I’ll ever be able to leave them.

So…we arrived to two boys who weren’t as unsettled with their breathing but that looked so pained and uncomfortable, it made difficult viewing. They were moved on Cpap….a quick progression, they tolerated it well. Austin was also given a blood transfusion. Again there wasn’t much we could do, so we left for a couple of hours at home to eat and mow the lawn before returning with Nannie and Grandad. We only took two pictures…..here they are.

I don’t have any final words of wisdom. No inspirational patter to leave you with. I just hope I never have to live another day like this! Let’s see what tomorrow brings…